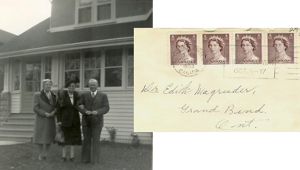 In 1960, the executive director of the Louisville Area Council of Churches, N. Burnett Magruder (1914-2005), created a stir when he accused Protestant clergy of succumbing to the “Marxist virus” and acknowledged his membership in the John Birch Society.  In the decade leading up to this declaration, as he worked to stem the tide of liberalism in the Council, Magruder had two other principal objectives: completing his doctorate at the Southern Baptist Theological Seminary and promoting the work of his equally conservative, Canadian-born wife, Edith Clysdale Magruder.  A collection of correspondence now available at WKU’s Special Collections Library casts light on the work and family lives of this ambitious couple.

Edith Magruder was a graduate of Yale and Columbia and the author of several books including A Historical Study of the Educational Agencies of the Southern Baptist Convention, 1845-1945.  During much of the period covered by this collection, she stayed at her parents’ cottage in Grand Bend, Ontario, working to establish a reputation in the field of Christian-based psychotherapy and counselling and, with the help of her husband in Louisville, trying to gain a foothold for her ideas in the United States.  Adopting the professional name of “Judith Brigham,” she also hosted radio broadcasts in Ontario and later on station WAKY in Louisville.

As the collection shows, Edith’s parents, Fred and Florence Clysdale, wrote faithfully to their rather doctrinaire and iconoclastic daughter.  Their letters provide a portrait of a small-town Ontario clergyman and his wife adjusting to the challenges of semi-retirement including a change of residence, the care of an aging relative, and the purchase of their first television set.

A finding aid for the Magruder-Clysdale Collection can be downloaded here.