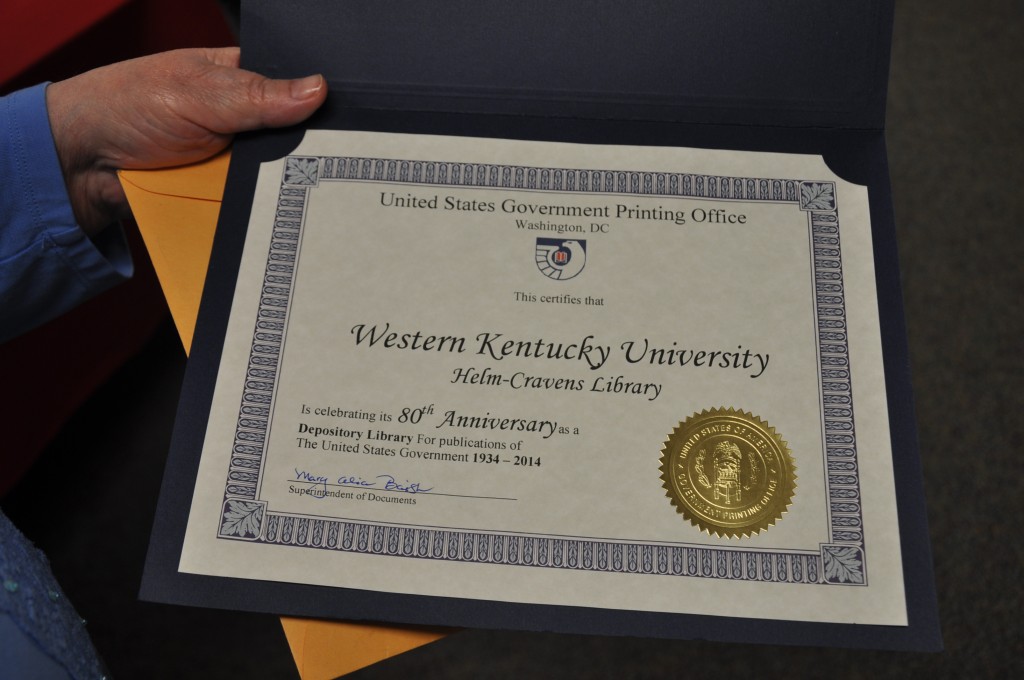 The Gulf: The Bush Presidencies and the Middle East

Michael Cairo is Associate Professor of Political Science at Transylvania University in Lexington, Kentucky. His newest title “The Gulf: The Bush Presidencies and the Middle East.” Most students at WKU haven’t known a time when there wasn’t a mention of war in the Middle East.

END_OF_DOCUMENT_TOKEN_TO_BE_REPLACED

Comments Off on The Gulf: The Bush Presidencies and the Middle East

Recognizing Our Veterans for Veteran’s Day

Come see our display case on the 5th floor of Cravens commemorating our currently employed & student Veterans at WKU!  Thank you all for fighting for our freedom!!!

Comments Off on Recognizing Our Veterans for Veteran’s Day

The following blog post is part of an ongoing series on the government documents collection.

Government documents can be searched for using the library’s new OneSearch search interface. Simply type your topic into the search box and click “Search.” Once your results have been listed, you can refine your search to only government documents by choosing the options which contain “Government” in the location refinement options.

When clicking on a listing for a government document, you will notice that the location is not formatted using the Library of Congress Classification System. Instead, it uses the Superintendent of Documents classification system, developed by the Government Printing Office (GPO). In it, documents are grouped by the government agency or department that published the materials. Major agencies are identified by an assigned letter and then further broken down by number into the subordinate offices. These are further broken down into series.

In the next installment, we will begin exploring the materials WKU’s Government Documents collection has to offer.

Comments Off on Introduction to Government Documents