Food is one of the necessities of life.  It is no surprise that Library Special Collections—which documents the Commonwealth’s culture—has quite a few items related to food.  To celebrate this culinary material, an exhibit titled “Food, Glorious Food!” has been installed in the Jackson Gallery, on the second floor of the Kentucky Building.  The exhibit will run through June 26.

Each case within the exhibit represents different aspects of Kentucky’s culinary heritage.  Chief amongst the cases is one that highlights the collection’s cookbooks.  In 2003 the Kentucky Library was the beneficiary of a large number of cookbooks from the estate of Jeanne (Leach) Moore, a Morgantown native.  This collection included over 1,500 titles that were added to the collection.  This was expanded significantly with a gift from Albert Schmid a few years later.  Without a doubt, Library Special Collections boasts one of Kentucky’s most significant cookbook collections.  This case features the variety of cookbooks found in the collection ranging from an 1823 early-American cookbook to children’s guides to cookery.  Because of the depth of this collection, cookbooks are used throughout the exhibit.

Another focal case features menus from restaurants across the state, ranging from dime store soda fountain menus to those from fine Louisville restaurants.  These items are cultural treasures, as they share fares available at various food establishments, costs of items, logos and trademarks, and colorful graphics.  This case also includes examples of matchbooks, once a ubiquitous give-away at restaurants, postcards, and business cards.

One case includes material related to stoves and ranges.  Generally a stove uses coal or wood for a fire source, and a range uses electricity or gas.  This case features cookbooks from several appliance companies, photographs of these appliances, and promotional material issued by various manufacturers.  Included is a photograph of the showroom of the Louisville Tin & Stove Company which shows many of the company’s wares on display.  Also included is a catalog from the same company which indicates the great array of stoves and other items produced by this concern.  The last two items were donated by Pam Elrod.  The highlight of this case is a miniature toy stove donated by Marjorie Claggett and appears courtesy of the Kentucky Museum.

Other cases feature images and publications from Western Kentucky University food science classes and other campus food related activities; labels and other items of food packaging; material highlighting some Kentucky food specialties such as cream candy, Hot Browns, derby pie, and mint juleps; and large posters and photographs that document certain aspects of food in the Commonwealth.

Comments Off on Food, Glorious Food!

During the fall semester of 2018 three Anthropology majors interested in museum studies worked as interns in WKU Archives to create an exhibit entitled Bowling Green. The students, Jennifer Roberts, Jordan Mansfield and Beth Sutherland were given seven exhibit cases. They each chose two topics to fill six cases and they collaborated on the topic of education for the seventh and largest of the cases. END_OF_DOCUMENT_TOKEN_TO_BE_REPLACED

END_OF_DOCUMENT_TOKEN_TO_BE_REPLACED

WKU Archives’ newest acquisition is this 1884-85 catalog for the Southern Normal School & Business College.  The front cover looks a bit waterlogged, but the interior is in excellent condition.

The Southern Normal School was created when A.W. Mell and Tom Williams left the Glasgow Normal School and moved to Bowling Green. It was originally called the Southern Normal School & Business College, but in the 1886 charter the name was changed to Southern Normal School. From 1890-1892 the school went through a succession of management changes being overseen by H.A. Evans, W.J. Davis, J.R. Alexander and H. McD. Fletcher.  It came into the hands of Henry Cherry and his brother Thomas in 1892 with yet another name change. END_OF_DOCUMENT_TOKEN_TO_BE_REPLACED

Comments Off on Southern Normal School

This is it. This is my last week in the Department of Library and Special Collections, and I am very grateful for the time I have spent here. Since I finished working on the Parking Exhibit, which if you have not checked out yet you should, I have moved on to processing files and photos from the WKU Theatre and Dance program. I have to admit I was a little nervous before I started going through everything. There was so much history and hard work that was being showcased in the photos and programs. I wanted to make sure it was all preserved and documented so people years from now could enjoy it. I enjoyed learning about the Western Players. END_OF_DOCUMENT_TOKEN_TO_BE_REPLACED 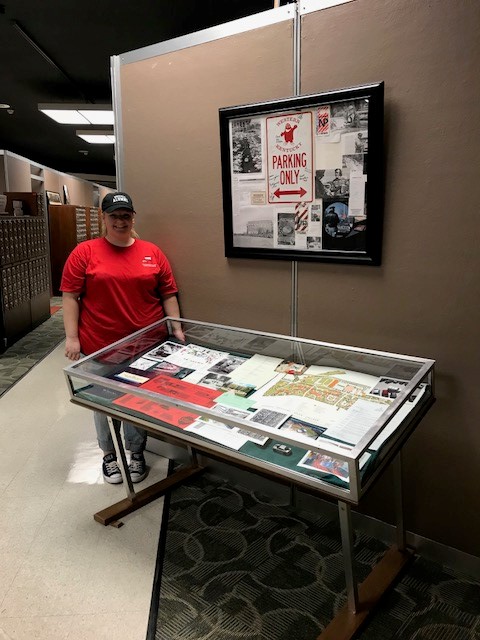 I get asked all the time what are you majoring in, what are your plans once you graduate, and what kind of career do you want? I used to tell them any other answer than the truth, because for a long time I had no idea what I wanted to do. I had no clue what I wanted in the future because it always seemed so far away. Now I am within a year of graduating Western Kentucky University with a degree in Anthropology and I can finally say the truth. I want to work in a museum, or archives setting, and that is exactly what I have been doing for the last few weeks. I have had the extraordinary privilege of interning in the WKU Archives. I cannot tell you how amazing it has been. END_OF_DOCUMENT_TOKEN_TO_BE_REPLACED

WKU Archives is located in the Kentucky Building and is open Monday-Friday 9 AM – 4 PM.

Comments Off on World War I Resources in WKU Archives

In the official history of WKU, Lowell Harrison described James Oshiro and his situation. “Born in Hawaii of Japanese parents, he lived in Japan for sixteen years before returning to Hawaii. Nine years later he was persuaded by a Western alumnus to go to the Hill. The short, slight, twenty-six-year-old student enrolled in September 1940 to major in history. His financial support from a brother-in-law in Honolulu was suddenly cut off after the Pearl Harbor attack, and no one could predict the reaction of Western students and Bowling Green townspeople. ‘It breaks my little heart even to think of this horrible war between two nations,’ James wrote President Garrett in late December; he would gladly fight for the United States, ‘and I am sure that God will forgive me having fought against my parents’ country.’” (2) END_OF_DOCUMENT_TOKEN_TO_BE_REPLACED 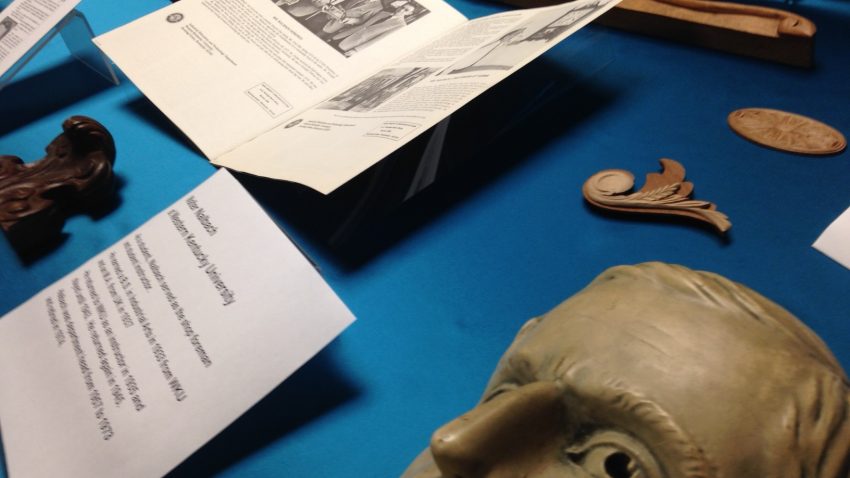 Walter Nalbach left Grand Rapids, Michigan, to become a student in the newly established Industrial Arts program at Western Kentucky State Teachers College at the invitation of L.T. Smith. He earned his B.A. from WKSTC in 1933 and went on to be an instructor at WKU for 37 years- and was department head for 16 of those.

Nalbach was also active in Rotary, the Kentucky Industrial Education Association, and the Calendar Club.

To learn more about Walter Nalbach and see examples of his work, visit the Department of Library Special Collections in the Kentucky Building, Monday-Friday 9 a.m. to 4 p.m.

Comments Off on Nalbach Exhibit