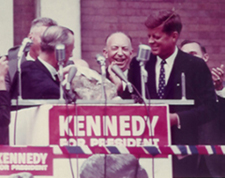 4 Responses to “Mrs. Kennedy is most grateful”