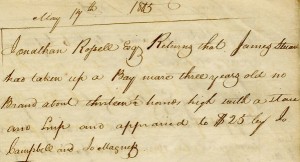 Perhaps the most famous stray animal in Kentucky history was the unsuspecting hog that trotted onto Hatfield land and was claimed by the McCoys, thus ramping up the multi-generational feud between those two families.  Most incidents regarding strays are less dramatic, but given their value, their number and their tendency to wander off, horses and other livestock have long been the subjects of “finders-keepers” law in Kentucky.

At first, Kentucky used the relevant statute inherited from Virginia, but in 1794 passed its own stray law.  Persons finding and taking custody of such animals had to make a report to a local justice of the peace, who transmitted the information to the county court clerk.  Subject to the qualifications of the finder, proper publication of notices, and payment of applicable fees, the animal became the finder’s property as long as no one claimed it within two years (for horses) or one year (for other livestock).

The collections of WKU’s Special Collections Library include several stray books maintained by the Warren County Court.  Dating mostly from 1797-1825, they include required details about the location and description of the animal, thus giving its owner a chance to identify and claim his lost property.  In February 1809, for example, Vincent Willoughby gave notice that he had “taken up one dark bay mare eight or nine years old blind of the right eye a small star in her forehead & some white spots above her jaws & saddle spots both hind feet white about fifteen hands high,” appraised at $40.  Many of the entries record single stray horses, but also included are cows, sheep and hogs.  In December 1800, Burwell Jackson took up 13 head of stray hogs “marked with a swallow fork in the right ear & a crop and half crop in the left,” and in January 1824 William Gardner took up nine head of stray sheep three miles north of Dripping Springs.

These stray books are part of a large collection of Warren County Court records held by the Special Collections Library.  Click here for a finding aid.  To explore our other collections, search TopScholar and KenCat.

Comments Off on Finders, Keepers