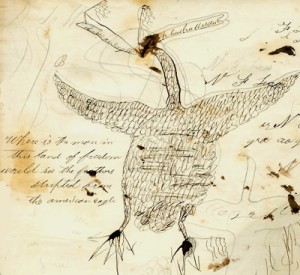 What employee of a mercantile establishment hasn’t passed the time on slow days behind the counter by indulging in small diversions?  At first glance, it wouldn’t seem like the Stubbins & Lucas Pork House had any time to spare in 1859.  The Bowling Green firm maintained a high-volume business, supplying sides and shoulders of pork, bacon and ham, both to individuals and to the steady flow of steamboat traffic on the Barren River.

Nevertheless, clerk R. S. Griffith had a few moments to daydream between transactions.  With web surfing, e-mail and social media still 150 years away, his expressions took the form of some elaborate doodles in his account book.  One in particular showed his patriotic sentiments.  His representation of our national emblem came out looking more like a chicken than a bald eagle, but the message was sincere.  “E pluribus unum” declared the wingspread creature.  Beside it, Griffith wrote, “Where is the man in this land of freedom would see the feathers stripted [sic] from the American eagle”?  Not here, we presume.  And then, back to work.

A finding aid for the Stubbins & Lucas Pork House account book can be downloaded here.  For other collections in WKU’s Special Collections Library relating to Bowling Green businesses, search TopSCHOLAR and KenCat.