Mistress of All She Surveys 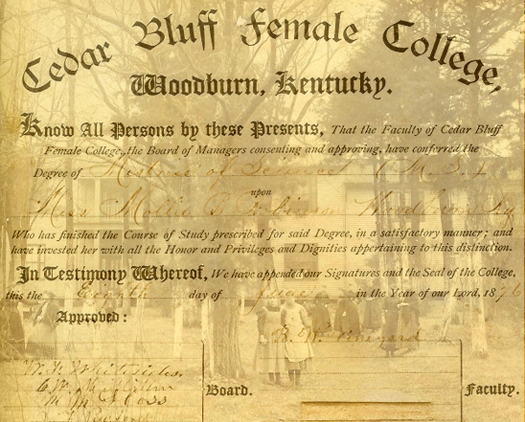 In 1864, Simpson County, Kentucky farmer William F. Whitesides established a “strictly select” school in his home to educate his two daughters.  Other girls soon joined them, and in 1867 the school was chartered as Cedar Bluff Female College.

Housing as many as 80 boarders, the school’s two-story, frame building near Woodburn hardly resembled today’s college campuses.  In fact, the proprietors of 19th-century female schools regarded it as essential to the safety and morals of their charges to maintain as domestic an atmosphere as possible–to provide, Cedar Bluff College’s catalog explained, “that care and solicitude of which young ladies should not be deprived while absent from the paternal roof.”  Students could stroll at will over the ten-acre campus, but could go no farther unless chaperoned.  Cedar Bluff was, declared its catalog, a “perfect Arcadia of quiet beauty,” undisturbed by townspeople or curious young men.

The gendered education of Cedar Bluff’s students extended to their academic certification.  Through various combinations of courses in the arts, classics, languages and natural sciences, together with “ornamental” electives such as music, drawing and French, the young ladies could earn one of three degrees: Mistress of Arts, Mistress of the English Language, or, like 16-year-old Mollie Robinson, Mistress of Science.  Mollie’s diploma, awarded in 1876 and signed by William F. Whitesides (who happened also to be her uncle), was an attractive piece of parchment from which dangled a 6-inch-long silk ribbon impressed with the seal of the college–an “MS” degree, but with a less-than-modern connotation.

Comments Off on Mistress of All She Surveys