WKU Libraries: A Century of Excellence 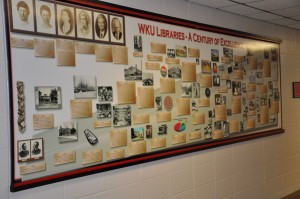 Millennial Mural for WKU Libraries
“A Century of Excellence”

Over the course of its first 100 years, WKU Libraries was served by five visionary leaders each of whom in their own unique way contributed to the growth and expansion of library services and collections. 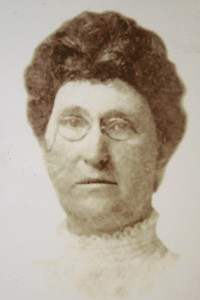 About our first librarian, Parthenia Weller, little is known. She seems to have served the newly founded institution for only a year and later worked as an apprentice at the Nashville Public Library in 1909. Years later she was living in Ashville, N.C. when she visited friends and family in Bullitt County on January 4, 1924. 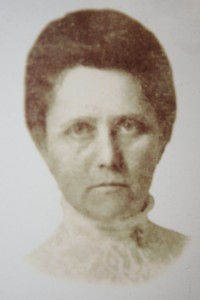 The career of Florence Ragland, who served as the school’s second librarian from 1908-1922, is far better documented. She listed her experience as 5 months at the library of the Indiana State Normal School and six weeks at Simmons College in Boston. Believing books should be easily accessible to college students; she replaced locked cases with open shelves, and introduced the Dewey Decimal Classification System. A meticulous note taker she recorded the library budget for 1915 as $3,344.95. $502.23 for books, $201.50 for periodicals, $67.90 for binding, $1,350 for the librarian and $1,223.22 for two library assistants. The no. of volumes in the library stood at 8,495. She had a great fondness for campus beautification and with a Modern Languages teacher, Elizabeth Woods, started a drive in 1929 to beautify the campus with flower and shrub plantings. 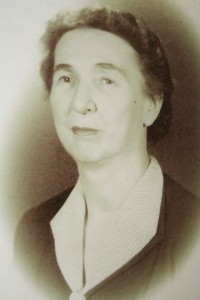 When Miss Ragland joined the English department in 1922, Margie Helm, her assistant since 1920 assumed the responsibilities of caring for the library and its collection of about 10,600 books and 72 periodicals. Helm, a native of Auburn, Kentucky was a graduate of Randolph-Macon Woman’s College and later received her MLS from the University of Chicago in 1933. One of her first duties was to oversee the moving of the collection from a room in Recitation Hall, a three and half story wooden building which had been constructed in 1889 at a cost of $561,819 to serve the Potter College for Young Ladies. When WKU purchased Potter College in 1909 and renamed the building it served the campus as a classroom building and library. The new home for the library was the Cedar House which had built by students in 1921 at a cost of $6,000. Here the library languished in a cramped and poorly heated facility until the 1927 completion of a handsome limestone building later renamed Gordon Wilson Hall. 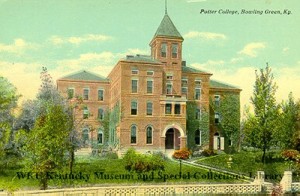 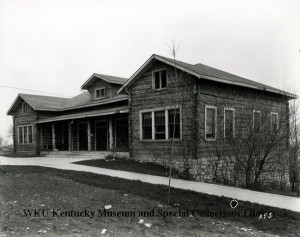 The Library Building as it was first known was designed by famed architect Brinton Davis at a cost of $200,000 and was a three story building constructed of Warren county white stone, with 10 columns taken from classic Greek architecture. In 1929 a fountain was added designed by Henry Wright with portions donated by Perry Snell. 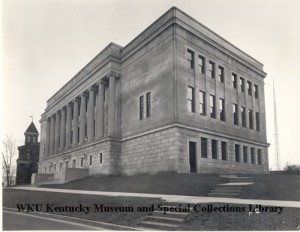 In 1931 construction began on the Kentucky Building and interior work was still not completed when the building opened for business in 1936. 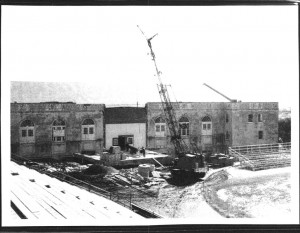 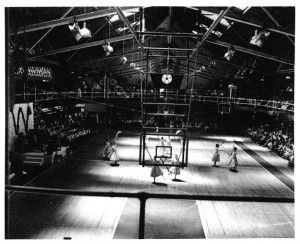 Another view of the Old Gymnasium

Under Miss Helm’s direction the library’s holdings—and budget—tripled in less than 10 years—and with the introduction of the school’s library science department in the 1930s, the library was frequently filled capacity. By the late 1950s the library again needed space. After much thought the university decided to convert the old gymnasium into a library and construct a new athletic building that could include a swimming pool. Although many were not enthusiastic about the conversion, it did provide twice as much space for 350,000 volumes, was close to classroom buildings –and was air conditioned! On December 23, 1964 the “new” library in a converted gymnasium- renovated at a cost of $1,277,451 by architects W.S. Arrasmith and Joseph P. Wilk opened and was renamed to honor Miss Helm, who retired the next year after 45 years of service. One of the founders of the Bowling Green Public Library (now the Warren County Public Library) she was also president of the Kentucky Library Association. 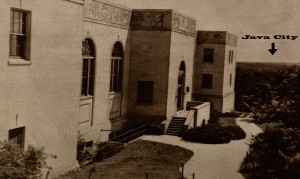 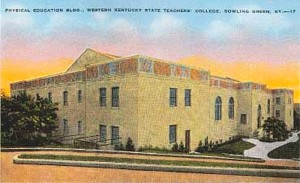 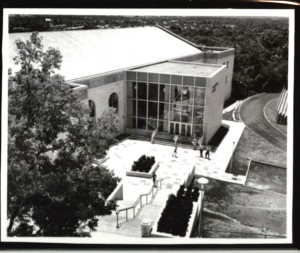 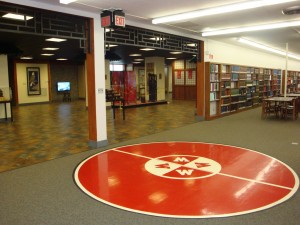 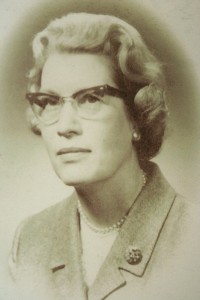 On Helm’s retirement, Sara Tyler, who had joined the library staff in 1958, became director of the library. Her interests included the preservation of school’s records, and thus she created the university archives. 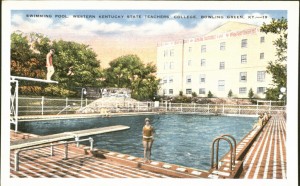 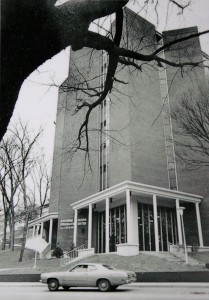 And changed continued. Recognizing the need for space and the advantage of new technology, Dr. Henry Hardin, Dean of Academic Services promoted the use of computers in the library and with the leadership of Vice-President Raymond Cravens developed plans for the construction of a new nine story library and graduate center which opened in 1971. Architect Frank Crain who worked on many design projects at Western in his 1994 memoirs commented that the building was constructed in what used to be a swimming pool. He said it was the most interesting building he constructed because it was so difficult to orient it with the rest of campus. “It was at a weird angle and took some real creativity to make it fit,” he said. Controversy arose over the three that now grows through the hole in the bridge that leads to the fourth floor entrance to Cravens. “They wanted to cut it down,” Cain said, “I said that was nonsense. We would just build around it. I thought it was live.” And he was right. 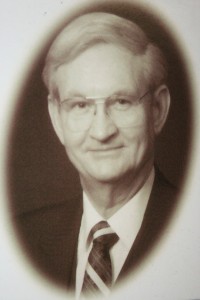 Dr. Earl Wassom, the library’s next director promoted much of the move towards automation and the reclassification of books to the Library of Congress system. This led to the creation of one of the first online catalogs in the country which was used as a prototype by IBM. 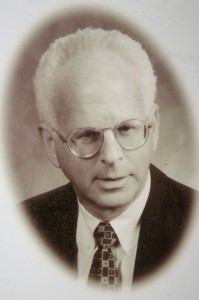 New technology, the acquisition of state-of-the-art equipment and innovative accommodations continued under Dean Michael Binder after 1985. The stacks were reorganized from LC Classification A to Z on floors 5 through 9 and a Centralized reference unit was created in Helm. In 1987 he fostered the creation of the state’s first Extended Campus Library Service connected with its first telefax network and later promoted the establishment of the Kentucky Virtual Library which provides access to databases for schools, colleges and universities. WKU Libraries won a Golden Webby in 2000 for its excellence in web design, content and creativity.

Today, WKU Libraries, which now consists of a central library, three on campus branch libraries, three off campus regional libraries along with a vast network of interconnected social media from web sites to blogs and Facebook to Pinterest pages, continues to evolve to meet the information needs of succeeding generations.

Comments Off on WKU Libraries: A Century of Excellence

Filed under General, Past Events, Uncategorized