“Every Foot of Southern Soil”

It was an appeal to the voters of Kentucky’s Seventh Congressional District for the opportunity to represent them.  If elected, the candidate promised, “you shall have in Congress my most zealous and constant attention to your business,” the first priority being defence.  But the candidate was not asking to be sent to the nation’s capital, nor was he sounding the call to arms on behalf of the U.S.A.  Rather, Horatio   Washington Bruce (1830-1903) was seeking election to the first Congress of the Confederate States of America. 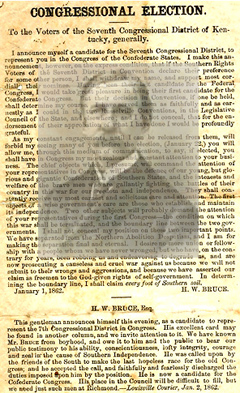 Bruce, a Louisville attorney and former member of the Kentucky House of Representatives, had run unsuccessfully for the U. S. Congress before casting his lot with the Confederacy at the outbreak of the Civil War.  He attended two conventions held at Russellville in October and November 1861, where delegates drew up a resolution of secession and formed a provisional Confederate state government.  In the campaign for the first elected Congress, Bruce pledged himself to the “defence of our young, but glorious and gigantic Confederation of Southern States” and to making “final and eternal” its separation from “the Northern Abolition Despotism.”  His work, he promised, would focus on securing appropriate terms for peace and on establishing a boundary line between the resulting two governments–a demarcation in which, he promised, “I shall claim every foot of Southern soil.”

With an endorsement from the Louisville Courier, Bruce was elected in January, 1862 and reelected two years later.  Serving until the end of the war, he returned to Louisville, pardon in hand, to a life of law practice, teaching and judgeship.

A handbill setting out Horatio Washington Bruce’s appeal to the voters of Confederate Kentucky is part of the Manuscripts & Folklife Archives section of WKU’s Special Collections Library.  Click here to access a finding aid.  For more collections, search TopSCHOLAR and KenCat.

Comments Off on “Every Foot of Southern Soil” 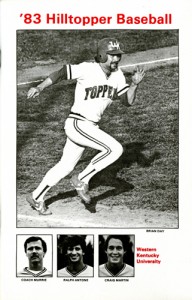 Comments Off on July Cool Stuff