Haiwang Yuan Shared His Trip to Tibet with Colleagues 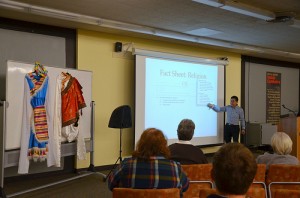 WKU Libraries’ professor and web coordinator Haiwang Yuan received WKU’s 2012 RCAP grant and fall 2013 sabbatical, with which he embarked on a research trip to Tibet, the so-called “Roof of the World” for his book project Tibet Folktales in May 2013.

On Tuesday, February 25, 2014, he shared his adventurous trip with his library colleagues. His presentation drew a large crowd. The audience savored the Tibetan butter tea, tsampa (a kind of bread), and meat pie he had fixed. His book is going to be published in the spring of 2014 by ABC-CLIO. The book not only contains an overview of Tibetan history and culture, but also tells more than two dozen beautiful Tibetan folktales. It also has the recipes of the food and drink he had shared during his presentation.