After a close, and acrimonious bid to win the Republican Party presidential nomination in 1976, Ronald Reagan lost to the more moderate and sitting President Gerald R. Ford.  In the ensuing Bicentennial election, Ford lost to his charismatic, grinning Democratic opponent Jimmy Carter.  Confident that his future included national service, Reagan never stopped campaigning over the next four years.

In 1977 Reagan was invited to speak at Western Kentucky University’s Free Enterprise Fair.  Prior to his speech on September 22, Reagan participated in a press conference in which he answered questions about issues of national concern.  One of the most heated topics of the day was the Panama Canal Treaty; 80% of Americans believed that the U.S. was giving the  canal away.  When asked about it, Reagan railed against the Carter administration for contemplating the transfer of the canal to “a man [Omar Torrijos] who’s there, not because he had the most votes, but because he had the most guns.”  In his remarks, Reagan basically promotes the chief tenet of the Monroe 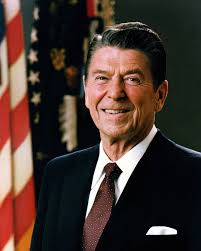 Doctrine which acknowledged the United States as the protector of the Americas.   “I think that basically the world is not going to see this [giving away the canal] as a magnanimous gesture on our part, as the White House would have us believe,” noted Reagan.  “They are going to see it as once again American backing away and retreating in the face of trouble.”  When it came to giving the canal away, Reagan strongly stated:  “I’m going to talk as long and as loud as I can against it.”

His press conference remarks were recorded for posterity and are located in the Manuscripts & Folkife Archives unit of the Department of Library Special Collections.

Comments Off on Ronald Reagan Speaks About Panama Canal