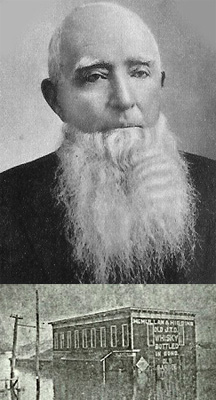 Charles J. Van Meter; a scene from the flood

By the time of his death on January 7, 1913, Charles J. Van Meter had become a much-loved citizen of Bowling Green.  The 87-year-old son of Jacob and Martha Van Meter began his adult life as a clerk and farmer, but in 1856 he and two partners built a steamboat to run on the Barren River.  After establishing the Bowling Green Navigation Company, Captain Van Meter was instrumental in constructing a system of locks and dams to facilitate river traffic and enhance the commercial prospects of his native city.

Captain Van Meter may have had command of the Barren River during his life, but the waters almost got the better of him on the day after his death.  As was the custom, Van Meter’s body lay in his house pending the funeral, but the river had been rising and a severe flood was imminent.  As told by J. B. Donaldson, a bank clerk who witnessed the flood, the cellar of Van Meter’s house was filling and the water was six inches deep in his yard.  Fearing that access to the coffin would be cut off, Donaldson, undertaker Eugene Gerard and another man carried it out of the house to a waiting hearse.  As the waters began to cover nearby roads, the men transferred the coffin to Gerard’s funeral home by cutting fences and driving through fields.

Donaldson himself had already had a narrow escape from the flood.  The house he rented was inundated, but before leaving he managed to free some mules in an adjoining barn that were in water up to their backs, and to send a young calf swimming to safety by tying it to one of the mules.  Returning to his house later in a borrowed boat, he managed to recover a few of his soggy possessions.

J. B. Donaldson’s account of the Barren River flood of 1913 and the “rescue” of Charles J. Van Meter is part of the Manuscripts & Folklife Archives collections of WKU’s Special Collections Library.   Click here to download a finding aid.  For more of our collections, search TopSCHOLAR and KenCat.

Comments Off on A Watery Farewell