The Biology Department is mourning the loss of its pet rattlesnake. Death came stealing in on Sunday night after Homecoming and claimed it for her own. Some seem to think that the rattler was so disappointed over Western’s loss to Murray that it felt that future life was not worth while, even if that life was to be devoted to science.

None of the other depart[ments] was affected, as no one but Death and the Biology Department would want a rattlesnake or care what became of it.

Yes, we are digitizing more College Heights Heralds.  I do enjoy reading through them and coming across tidbits like the one above from the Nov. 10, 1933 issue.  The October 27th issue had reported the 20 to 6 homecoming game rout.  Apparently it was too much for a devoted Hilltopper rattle snake to take.

October – Out of the Box 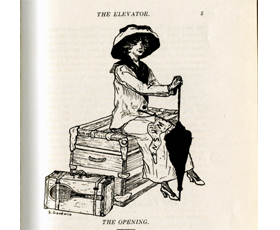 Comments Off on October – Out of the Box