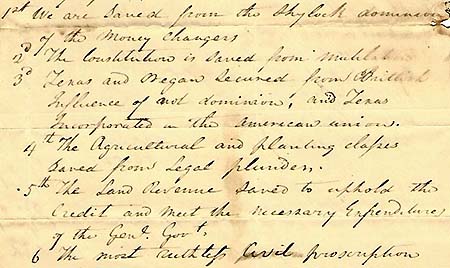 As the major party conventions kick election season into high gear, and we brace for dark predictions that the ascendancy of one or the other candidate to the presidency will mean the certain destruction of the republic, here is an expression of relief from Elijah Hise (1802-1867) after the 1844 election of Democrat James K. Polk to the Oval Office.  Sharing his elation in a letter to a fellow supporter, Hise, a Kentucky state legislator, diplomat and future U.S. Congressman, dramatically inventoried the disasters averted by Polk’s triumph over Whig opponent Henry Clay.  Among them:

1st We are saved from the Shylock dominion of the money changers.

2nd The Constitution is saved from mutilation . . . .

4th The agricultural and planting classes saved from legal plunder . . . .

7th National debt funding system, British influence and finally a dissolution of the Union all, all prevented by the gallant brave & virtuous democracy of the Union . . .

9th Our prospect is brightened to rescue our beloved state from the extravagant and corrupt rule of modern Whiggery.

Recalling a taunt in the Senate that “the Democrats were like condemned felons upon a cart going to execution,” Hise rejoiced that “this universal proscription has been prevented” and that the speaker’s “insatiate maw . . . will never be filled with the food it so much craves.”

Elijah Hise’s letter is part of the Manuscripts & Folklife Archives collections of WKU’s Department of Library Special Collections.  Click here for a finding aid.  For more of our political collections, search TopSCHOLAR and KenCat.

Comments Off on “We Are Saved” (Again)