WKU Library Special Collections often commemorates leap year with an exhibit. This year, our efforts to educate our viewers about the legend of the 5th century agreement between St. Brigid and St. Patrick that allowed women the right to propose for 366 days every four years and subsequent beliefs about laws, have broadened.
Sue Lynn McDaniel published an article “Leap Year: Chance, Chase or Curse?” in the January 2016 issue of The Ephemera Journal. See http://works.bepress.com/sue_lynn_mcdaniel/ Last week, she was the “Talk of the Town” in our local Bowling Green Daily News for her research on leap year and has curated an exhibit that closes March 31st in Library Special Collections entitled: “Time to Leap!” displays a portion of our collection. 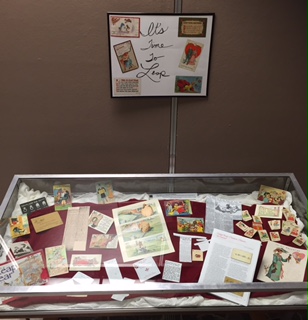 A case exhibit provides a hint of all the sources now in the Selected Works Gallery.

But most  exciting  for  us this  year is  our  new opportunity to go beyond our doors by opening  the Library Special Collections’ Worth A Thousand Words gallery “Leap Year Postcards and  Ephemera.”  This  site functions as searchable permanent sources for  users not  necessarily OPAC friendly. Enjoying exhibit cases are limited by schedules and  the viewers’ ability to travel to the destination.   Nancy Richey will continue to add  all our postcards to KenCat, while Sue Lynn McDaniel adds ephemera to this online catalog, but  we anticipate wider usage and visibility of our primary sources through this  TopScholar  gateway.  Please  explore the Leap Year Postcards and  Ephemera, via http://digitalcommons.wku.edu/ly_pe/  Once you have reviewed the materials, come hear Sue Lynn McDaniel’s presentation:  “Time to Leap” on Leap Day, February 29, 2016 at 4 p.m. in the Western Room of  the Kentucky Building.  For students, this  is  a swipeable event.

Comments Off on Leap Year 2016