When the Panama Canal opened to traffic 100 years ago on Aug. 15, 1914, it was a great feat of innovation and skill and connected the world’s two largest oceans. The opening event drew many news outlets and photographers.  Its appeal has continued throughout the years as evidenced by this photograph produced by the Galloway Company of New York.  Native Kentuckian, Ewing Galloway (1881-1953) who was born in “Little Dixie,” in Henderson, started his career as a lawyer and city prosecutor. In 1920,  he opened his own photographic company which would become the largest stock photograph agency in the United States.  His studio trained many photographers who traveled worldwide taking images that focused on native peoples, transportation and commerce.  The agency today has photographic image holdings that amount to over four hundred thousand. In 1937, Galloway donated nearly 1000 photographs to the Kentucky Library. The photographs cover a wide variety of national and international themes. The image shown here showcases the Panama Canal’s Pedro Miguel Locks, with Gaillard Cut (formerly Culebra) in the distance, and features a large steamship leaving one of the locks for Miraflores on to the Pacific. 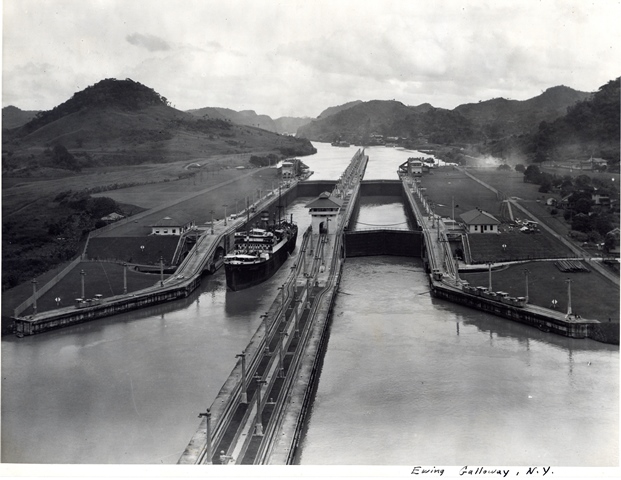