“A straight shirttail for home”

William Weldon was 22 when he left his mother, father and 16-year-old brother Vachel in Ballard County, Kentucky and struck out for Arkansas in 1848.  The entire family was on the lookout for opportunities elsewhere: Vachel would decamp for Texas in 1854, and his widowed father followed.

Five months into his absence, however, William was still anxious to hear all the news from back home in Kentucky—marriages, crops, religious conversions, and so on. But he had his own story to tell about a recent test of his gallantry.  It involved a young lady, “Modest, Handsome, & sensable,” but afflicted with “a disease which is very common in Kentucky called the flirts.”  Indeed, Weldon wrote in a letter, “Miss Fanny” was really on her game one “coald dry day,” pausing only briefly from her non-stop coquetry to pose herself dangerously close to the fireplace.  Weldon considered warning her but thought, no worries, she’ll “flirt away soon.”

He was wrong.  Fanny’s dress, no doubt a flammable mix of crinoline, muslin and gauze, suddenly ignited, and “she broke for the door with the blaze higher than her head.”  With no water handy, and without time to consider what a gentleman should do in such circumstances, Weldon surrendered to the “painful necessity” of tearing off her burning clothes.  “Just think of a young man stripping a lady in company,” he wrote sheepishly.  But it was all over quickly and Miss Fanny, her dignity no doubt as charred as her wardrobe, “made a straight shirttail for home.”

William Weldon’s letter telling of his rescue of Fanny the Flirt is part of the Manuscripts & Folklife Archives of WKU’s Department of Library Special Collections.  Click here to download a finding aid and typescript.  For more collections, search TopSCHOLAR and KenCat.

Comments Off on “A straight shirttail for home” 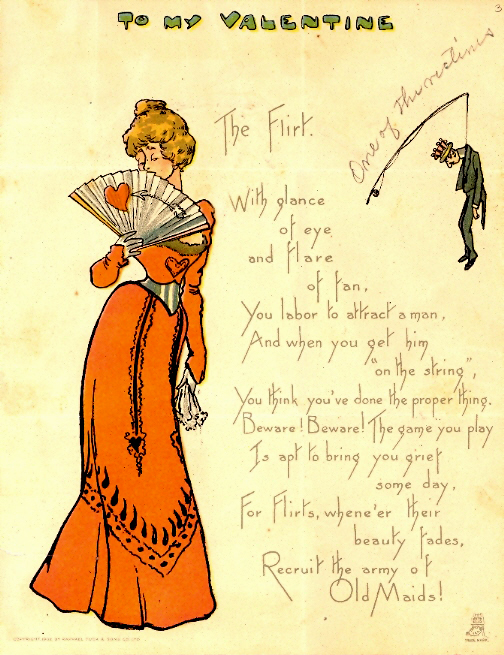