The “Comforts” of Home 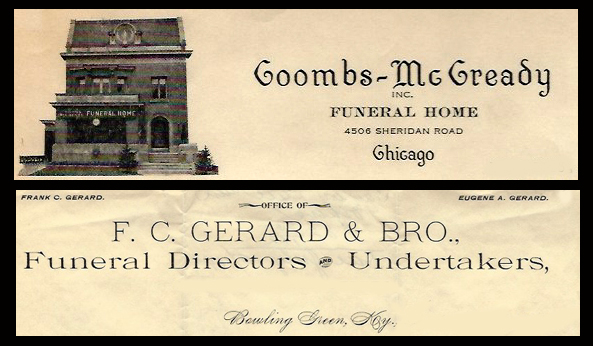 Funerals home and away

October 31, 1934 marked the closing of the second and final season of Chicago’s A Century of Progress International Exposition, also known as the Chicago World’s Fair.  In Bowling Green, Kentucky, the Times-Journal newspaper had arranged three-day tours for local residents, with discounted railroad and hotel rates, admission tickets, and local sightseeing trips.  The total cost per person was a mere $18.45–about $350 today, but still a bargain.

The 38 million people who attended the Fair found a spectacular attraction, but when so much humanity converged on one place, there was bound to be a darker side–accidents, illnesses and even deaths.  Indeed, an outbreak of dysentery, traced to contaminated drinking water at a local hotel, sickened more than 1,700 and killed almost 100 tourists.

On Sheridan Road, however, the Coombs-McCready Funeral Home was alert to the possibility of an uptick in what was, after all, their business, and sought to assure funeral directors across the country of its willingness to act as liaison in the event that a member of their community did not survive the Fair.

“It is more comforting to a bereaved family to feel they are dealing direct with you, whom they know, and not with a stranger,” wrote the firm’s president to Bowling Green’s Gerard Funeral Home.  Accordingly, for $40, “we will represent you and adhere strictly to your instructions”–from intake to providing a casket (another $40) to transferring the remains to the train station for the journey home.  Gerard’s funeral director was invited to forward contact information to Chicago “which will simplify matters at the time we are called to serve you”–and allow those who had suffered loss to connect with home for the necessary rituals.

The Coombs-McCready Funeral Home letter is part of the Gerard Family Collection in the Manuscripts & Folklife Archives section of WKU’s Department of Library Special Collections.  Click here to access a finding aid.  For other collections of funeral home records and information about the Gerard family, search TopSCHOLAR and KenCat.

Comments Off on The “Comforts” of Home