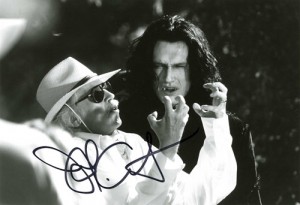 WKU is known for ghosts and those who hunt them.  The Folklife Archives houses many collected stories and legends about ghosts and other kinds of monsters, start with Supernatural Experiences.

WKU Libraries has many books related to the supernatural as well.

Ghosts have been known to appear in the Kentucky Library collections.

WKU Archives contains images and writings of John Carpenter, a local boy whose name has become synonymous with Halloween.

View a Kentucky Museum Pecha Kucha talk about the origins of Halloween.

Comments Off on Trick or Treat 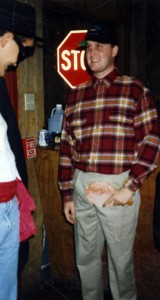 In 1908, nine-year-old Warren County native Ruth Hines Temple received a colorful Halloween postcard from her aunt.  More than a decade later, she still observed the scary season as a student at Randolph-Macon College.  There, she wrote her mother in 1921, seniors paraded solemnly in cap and gown carrying jack-o-lanterns made for them by the sophomores.  The next year, students paid 15 cents to gain admission to a full-fledged Halloween carnival in the gym, complete with side shows, music and food.

In the 1940s, before she moved to Bowling Green, Regina Newell experienced Halloween as a child in Coaldale, Pennsylvania.  She recalled knocking on doors in costume, prepared to deliver a little song, dance or recitation if she was asked, and of the older folks trying hard to guess the identity of each masked trick-or-treater.  Her school parties featured apple-bobbing and candy corn (“witches teeth”).  When Regina was eight, her family moved to California, where Halloween customs were somewhat different: trick-or-treaters got grapes instead of apples and wore makeup instead of masks, even though performing for their candy was no longer expected.

The stories of Ruth Hines Temple, Regina Newell and others are part of the collections of WKU’s Special Collections Library.  Click on the names to download collection finding aids. In addition, our folklife collections include lots of projects about ghosts, haunts, superstitions and the paranormal; or, you can read about ghostly happenings right here in Bowling Green and on the Hill.  For further information, search TopSCHOLAR and KenCat.

Comments Off on Parades, Grapes and Witches Teeth