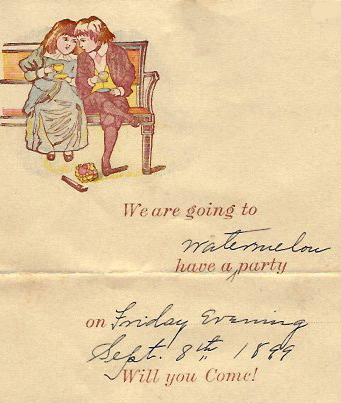 For a look into the daily lives of a Kentucky farm family late in the 19th century, WKU’s Special Collections Library offers this newly acquired diary, kept by an observant young woman in Columbia, Kentucky.

Josephine “Josie” Walker was nineteen when she began the second volume of her diary in October 1883.  Like most single women living at home, Josie organized her life around family, household duties, school, church, and social events.  She and her sister had their share of chores: “Sophie and I ironed some, churned, baked a cake & some apples and did a hundred other things,” she wrote on October 27.  The following summer, she enjoyed a day out at the county fair, where she feasted on watermelon, watched mule races, and admired prize-winning livestock and quilts.  Josie and her family, however, had decided not to go into town one day in March in order to avoid witnessing a scheduled public execution.  “I don’t see how a humane person could go to a hanging,” she confided to her diary.

Josie was also attentive to events in the wider world.  “This is election day.  Hurrah!” she wrote in anticipation of a new president in November 1884, but her hopes were dashed when Republican James G. Blaine narrowly lost to Grover Cleveland.  The Democrats, she grumbled, were uncharitably shooting off guns and making a “racket” to celebrate their victory.

September 6, 1884 had found Josie in a reflective mood.  “This is my twentieth birthday,” she noted, and two years had elapsed since she began to keep a diary.  “I suppose I am considered a grown lady by some,” she wrote, “but I feel as an ignorant timid child afraid to stand alone.  Let us hope the records of this year will be pleasant to refer to in years to come.”  With her diary now a part of our permanent collection, her wish can be fulfilled.

A finding aid for Josephine Walker’s diary can be downloaded by clicking here.  To find other diaries from Kentucky and elsewhere, search TopSCHOLAR and KenCat.

Comments Off on Josie Walker’s Book