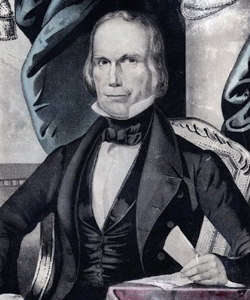 With its use of catchy slogans (“Tippecanoe and Tyler Too”), rallies, songs, banners and ribbons, the 1840 presidential contest between incumbent Martin Van Buren and the Whig Party’s William Henry Harrison marked the beginning of the modern era of campaigning.  Then as now, predictions about the outcome also enlivened the process.

That fall, Henry Clay sat down at his Lexington, Kentucky home, Ashland, to forecast the election results in response to a request from the Tippecanoe Club of Rushville, New York.  At the time, there was no single Election Day:  states voted for their presidential electors between October 30 and December 2, and the electors then met to vote for the next chief executive.  The Whigs had done well in most down-ballot races held in the preceding months, and Clay–who had lost the Whig nomination to Harrison, one of five tries he would make for the presidency–was in a good position to assess the race.

He got things nearly, but not exactly right.  Of the 26 states in the Union, Clay believed that Van Buren “would not obtain the votes of more than six.”  (He got seven).  Although down-ballot elections in Illinois had been disappointing for the Whigs, Clay was confident that “her vote will be cast in Nov. for W. H. Harrison” (He was mistaken).  He also conceded Maine to Van Buren (Harrison, in fact, won the state).  Otherwise, despite his lack of computer models and sophisticated polling, Clay would not have been embarrassed to compare his predictions with the actual result:  Van Buren’s 7 states brought 60 electoral votes, but Harrison’s 19 states and 234 electoral votes gave him the victory.

Clay nevertheless knew that voter turnout (or lack thereof) could make a fool out of any prognosticator.  “Cheering and bright as the prospects of success are,” he wrote, “it might be fatal to the salvation of the Constitution and the Country, to relax in honorable exertions. . . .  The Whig, therefore, who. . . neglects to perform his duty, is guilty of a double treachery–a treachery to his Country and a treachery to his Whig brethren in other parts of the Union, who are exerting all their energies to ensure success to our glorious Cause.”

Henry Clay’s letter to the Tippecanoe Club is part of the Manuscripts & Folklife Archives collections of WKU’s Department of Library Special Collections.  Click here to access a finding aid.  For more collections about Henry Clay and about other presidential elections, search TopSCHOLAR and KenCat.

Comments Off on An Election Prediction