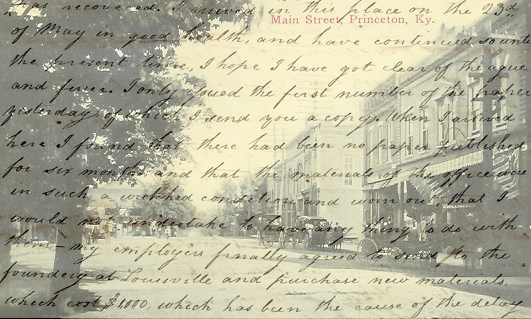 “I cannot say that I like the place all together.  It appears to be almost out of the world, but after I become better acquainted with the people I hope I will be better satisfied.”

Like many young men starting a new job in a strange town, Michael Rodgers wondered if he had made the right move.  In May 1846, the Pennsylvania native arrived in Princeton, Kentucky to take over a struggling newspaper.  He found five investors with no printing experience, some broken-down equipment, and an office in “wretched condition.”

For the next year, Rodgers worked hard and pinched pennies, upgrading the equipment and saving $350 out of his $600 salary.  But he could not overcome the tough economic times, and his employers decided to close the paper.  Some of Princeton’s 300 citizens, however, urged him to take the business over on his own account, and after issuing a prospectus he set an ambitious goal of 500 subscriptions.  Between the paper and other printing jobs, he hoped to make $1,000 a year (about $24,000 worth of purchasing power today).

During the next few years, Rodgers stayed afloat but remained conscious of his economic vulnerability.  One thousand dollars a year was still within reach, but he was spending $500 for room and board, which included responsibility for two young printer’s apprentices and the occasional journeyman.  True, he could save money by trading in his bachelor’s life and setting up housekeeping with a good woman, but Rodgers found his longings for a wife thwarted.  “Kentucky girls has not got the right sort of raising for me,” he wrote his mother.  “They have all been raised among slaves, and know nothing about taking care of a house.”

Michael Rodgers’ letters to his family in Pennsylvania are available in WKU’s Special Collections Library.  Click here to download a finding aid.  For more collections, search TopSCHOLAR and KenCat.

Comments Off on The Thousand-Dollar-A-Year Man