The NAACP in Bowling Green 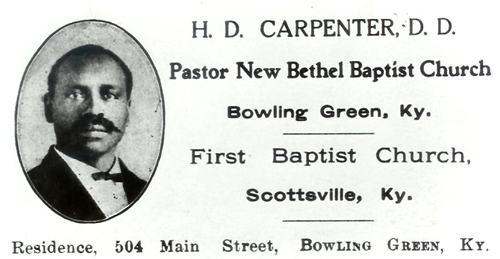 Reverend Henry D. Carpenter was a leader in the Bowling Green NAACP.

On this day (February 12) in 1909, a group of activists in New York decided to reinvigorate African Americans’ post-Reconstruction quest for civil and political rights by forming the National Association for the Advancement of Colored People.  Exactly a decade later, the Bowling Green, Kentucky branch of the NAACP was organized.  At a mass meeting at the Cumberland Presbyterian Church, after hearing the urgings of various speakers on “the good that can result from same,” the first 37 members enrolled.

The Manuscripts & Folklife Archives holdings of WKU’s Department of Library Special Collections include copies of the membership lists and minutes of the Bowling Green NAACP from its inception to June 1927.  Meetings, which rotated through the churches of the city, featured music, prayer, speakers, and discussions of local issues affecting African Americans.  For example, at an executive meeting in March 1919, the problems of “unequal accommodations for our race in traveling,” the “unsanitary conditions existing in the colored Waiting Room at the [train] depot,” and “The Need of a lunch stand for our Race at the depot” were referred to a committee on grievances for follow-up with the proper authorities.  In May, a clergyman “spoke of indignities heaped upon our people by arresting them on suspicion and when proven guiltless nothing done to exonerate the suspect.”

The chapter also considered issues brought to its attention in press releases from the national organization.  At a meeting in June 1921, local churches were asked to take special offerings for the “stricken & suffering” victims of a destructive race riot in Tulsa, Oklahoma, and in October 1922 the executive resolved to collect funds to support the NAACP’s advocacy of a federal anti-lynching law.

Click here for a finding aid to the NAACP (Bowling Green Chapter) Collection.  For more collections on African Americans in Kentucky, search TopSCHOLAR and KenCat.

Comments Off on The NAACP in Bowling Green