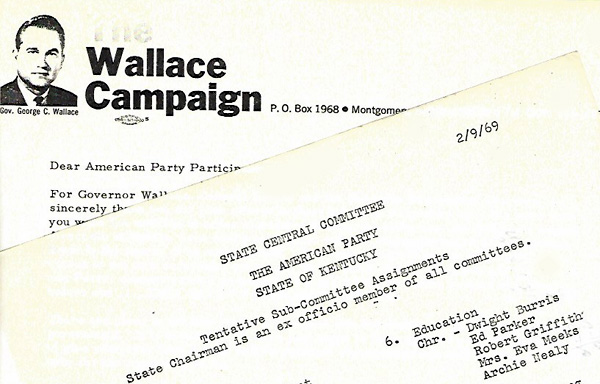 Since existing political parties do not offer valid choices to the voters, a new party is urgently needed.  The two existing parties, Democrat and Republican,. . . have deserted the principles and traditions of our nation’s Founding Fathers.

A clip from last night’s cable news?  Au contraire, as we look back almost 50 years to the policy declaration of the American Party of Kentucky, a copy of which is part of the Manuscripts & Folklife Archives collections of WKU’s Department of Library Special Collections.

First convened in 1968 to “provide the vehicle through which responsible conservative candidates can be offered to the voters,” the American Party stood for allegiance to God, limited government, free enterprise, private property, and traditional morality.  It stood against totalitarianism of all stripes, foreign aid, the United Nations, and government-sponsored charity.  By early 1969, the Party was incorporated and tutoring prospective candidates on how to file for local, state and national offices.

For its presidential candidate, the American Party selected former Alabama governor George C. Wallace, who, despite his segregationist resume, electrified supporters with his fiery rhetoric.  “Yes, they’ve looked down their nose at you and me a long time,” he said on the campaign trail.  “They’ve called us rednecks — the Republicans and the Democrats.  Well, we’re going to show, there sure are a lot of rednecks in this country.”

After the 1968 election, the Kentucky American Party’s Richard H. Treitz wrote to the faithful on letterhead of the Wallace campaign to thank them for their efforts.  The best was yet to come, he declared, asking for support in turning a grassroots movement into a truly national political party.  While not victorious in ’68, the soldiers of God and country had “scared the two-alike parties like never before and . . . THEY HAVEN’T SEEN ANYTHING YET!”

Click here to download a finding aid for the American Party collection.  For more of our political collections, search TopSCHOLAR and KenCat.

Comments Off on Politics. . . As Usual