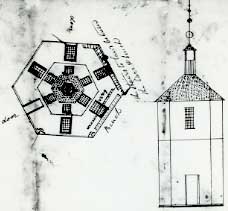 Robert Moore (d. 1819) and his brother George (1771-1812) are thought to have come from Rockcastle County, Virginia to settle in what is now Warren County, Kentucky.  In 1797, in an attempt to foster the beginnings of civilization, the brothers donated land near present-day Fountain Square for construction of a courthouse.  The following year, on a larger plot of land also donated by the Moores, the county court established the town of “Bolingreen.”  The Moores, as a consequence, have been hailed as the founders of Bowling Green, Kentucky.

After George Moore’s death, it appears that Robert took responsibility for the fortunes of his brother’s widow and five children.  Unfortunately, disputes arose between the families relating to the brothers’ management of their landholdings, and the result was prolonged litigation.

As vexing as they can be for the parties involved, lawsuits have their rewards for historians.  Records of the lawsuit, heard in Barren County because of the local prominence of the litigants, provide most of the information that we know today about the Moores, their business and their families.

A finding aid for a collection of documents in the Manuscripts & Folklife Archives section of WKU’s Special Collections Library relating to the case of Robert Moore and the heirs of George Moore can be downloaded here.