On the morning of March 12, 1925, a bit of musical (and women’s) history was made on the Hill when a new tune rang out at chapel assembly.  The song College Heights was the winner of a competition between members of Macon A. Leiper’s English class.  The students had set out to create a poem that, when paired with a musical score, could serve as the school’s anthem.

College Heights, on hilltop fair,
With beauty all thine own,
Lovely jewel far more rare
Than graces any throne!

Bradley brought an extra advantage to the contest: her father Ben J. Bradley, an accomplished musician and composer, contributed the melody.

Not long afterward, another songstress, Bessie Swartz Cherry, the sister-in-law of WKU’s first president Henry Hardin Cherry, conceived another musical tribute.  The Red and the Gray referenced the school’s official colors prior to the change to red and white in 1956.

Both The Red and the Gray and College Heights became fixtures at commencement exercises in the 1930s and 1940s, but the latter eventually triumphed and has now become a familiar chorus for generations of WKU graduates:

Comments Off on Women strike a chord 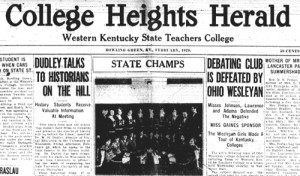 Set to the tune of Auld Lang Syne, The Kentucky Building song composed by Mrs. H.R. Matthews during the fund raising campaign appeared in the March 1929 College Heights Herald.

The Indian lore and pioneer
Shall never pass away;
Our relics we shall now preserve
And in our state they’ll stay

Comments Off on Kentucky Building Song