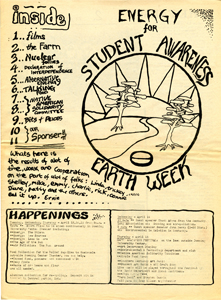 In 1976 WKU students observed Earth Week April 11th – 17th.  A group sprang up calling themselves Energy for Student Awareness.  They were concerned and printed a 12 page newsletter.  The group screened films, had a food drive for Guatemalans and staged the Earth Awareness Festival outside Downing University Center.  The newsletter includes articles regarding The Farm a commune in Summerton, Tennessee, nuclear energy, alternative energy sources, healthy eating, Native American rights and ecological legislation.

Do you remember Earth Awareness Festival?  How did you participate?  What will you be doing for Earth Day, April 22nd?

This and many other records are available for researchers through our online catalog, KenCat and in the Harrison-Baird Reading Room of the Kentucky Library & Museum Monday – Saturday, 9 – 4.

Comments Off on Earth Awareness Festival

Yesterday was the 40th anniversary of the Kent State massacre. In light of that, let’s look at protest movements at WKU.  Lowell Harrison in Western Kentucky University describes the affect of Kent State on WKU.  “The Volunteers, an ad hoc committee of student activists, called for a general strike on Friday, May 8, but most classes met, although often with diminished attendance.  “Strike Western” T-shirts quickly appeared. Protests demonstrations were countered by an anti-protest rally. . .  President Downing met with a group of students on the steps of the administration building; a graduate student who was active in the peace movement . . . A “sleep-in” Friday night on the lawn next to the administration building attracted about a hundred participants, including some small children and one dog.”

The Agitator, one of the first underground student newspapers debuted in 1964. After it came The Skewer [1965], The Expatriate [1970] and we still have The Big Red Tool in 2010.  The issues discussed in these publications include prostitution, freedom of speech/press, Vietnam war, and campus issues.   Students held a sit in regarding the racial issues in September 26 and a Vietnam Moratorium October 15, 1969.  In more recent years students have gathered to protest against the Ku Klux Klan and the Gulf War.  The 1971 political paper Spread Eagle has been digitized.

Some images from the period are available on KenCat.  Finding aids for the underground student newspapers and demonstration/protest photographs are available on TopScholar.  Read about protests in the Board of Regents minutes and the College Heights Herald.  Check out the online exhibit, Get on the Bus.  Share your memories of these and other events.  Visit the Harrison-Baird Reading Room in the Kentucky Library to see these and other primary sources regarding protests and demonstrations.