Java City Concert Series off to a Great Start!

The Java City Noon concert series returned on Wednesday with a performance by Technology vs. Horse. Bowling Green’s premier alt-rock group performed to an appreciative crowd outside the newly renovated Java City cafe in Helm Library. The concerts have become a tradition here on campus over the last few years as a great way to take a break while listening to live music. Don’t miss next week’s concert featuring singer/songwriter Alec Vincent.

Photos of the Event

A “Letter on a Record” 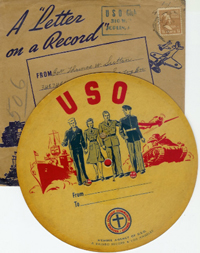 USO “Letter on a Record”

Before there was e-mail or Skype or DVDs or even cassette tapes, there was the “Letter on a Record.”  During World War II, servicemen could enter a booth at USO clubs operated by the National Catholic Community Service and make an audio recording.  The result was a two-sided, wax-coated cardboard disk, 6-1/2 inches in diameter and playable on a turntable at 78 r.p.m., that could be mailed to friends or loved ones back home.

One of these “letters on a record” is part of the collections of WKU’s Special Collections Library.  Speaking from Camp Crowder, Missouri, Private Thomas W. Sutton extends greetings to Eva Mae Stone in Washington, D. C.  In the few minutes of recording time available, Sutton asks her if she’s heard any good dance records lately (like Don’t Do It Darling), tells her about mutual friends, including “Chuck” (“he had to take a few weeks of basic [training] all over again and of course that didn’t appeal to him”) and, true to the nature of many soldiers, talks about his plans for his next furlough and how much he misses the “barbecue sandwiches and milkshakes” at one of his favorite hangouts.

A finding aid for Thomas W. Sutton’s “letter on a record” can be downloaded here.  For more information on World War II collections at WKU’s Special Collections Library, search TopScholar and KenCat.