An Illinois Soldier in Western Kentucky 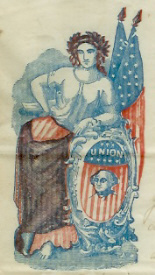 In January 1862, Private William J. Green, encamped with an Illinois regiment near Paducah, Kentucky, wrote letters to his brothers, 16-year-old Samuel and 10-year-old John.  He and the “boys in my Mess” had enjoyed the “Turkeys Pies and Bread” and the “Butter and Cake” his family had sent and were pleasantly settled, notwithstanding the rain and mud, in plank-floored tents with stoves.

Although none of the local civilians “claimed to be Secesh,” William knew there were many secessionists in the area.  As a farmer’s son, he even had some favorable comments about their crops and orchards.  William told Samuel of his 11-day march through McCracken, Graves and Calloway Counties, and of the Confederate sympathizers he encountered near the town of Murray.  The people there were stubbornly convinced, he wrote, that “we will never Conquer the South” and, lacking newspapers to tell them otherwise, “say that the Rebels have thrashed us every battle.”

Although William and his brother Samuel, who also served, made it through the war, they would both die within two months of each other in 1867.

One Response to An Illinois Soldier in Western Kentucky