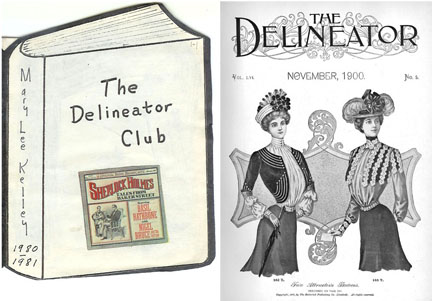 The November 1900 issue of The Delineator, a magazine offering fiction, fashion news and homemaking advice, noted the value of women’s clubs in keeping their members’ brains “busy with high thoughts” of literature, history and art.  When eleven women met on February 7, 1952 to form Bowling Green’s newest literary club, they sought to delineate their goals with the same care and precision as the popular magazine had shown in fulfilling its journalistic mission.

With a membership limited to fifteen, the Delineator Club, they determined, would meet monthly.  First on the agenda would be the enjoyment of a “dessert course”; next would come the presentation of a program by one of the members.  Finally, every member agreed to purchase one book per year, to become part of a circulating club library.

While many of the club’s programs (between 20 and 45 minutes long, stipulated its constitution) consisted of book reviews, the members also discussed political, historical and cultural topics and heard from guest speakers.  Club minutes not only recorded visits from artists, librarians and local professionals, but regularly remarked on the sinfulness of the rich desserts to which that month’s hostess treated her guests.  More important over the years has been the intellectual and social pleasure that the Delineator Club has offered members of every age and background.

The records of the Delineator Club’s first half-century are now part of the collections of WKU’s Special Collections Library.  Included are minutes, correspondence, yearbooks and photos.  Click here to download a finding aid.  For more on local clubs and organizations, search TopScholar and KenCat.

Comments Off on The Delineator Club