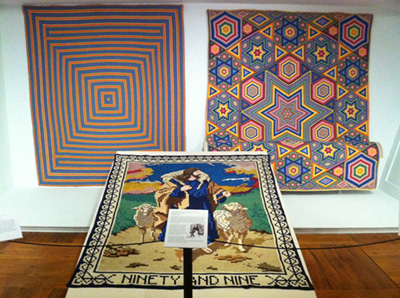 Composed of more than 66,000 pieces, the unique Spectrum Quilt can be seen through October 28 as part of an exhibit, Man-Made Quilts: the Civil War to the Present, at the Shelburne Museum in Shelburne, Vermont. Its maker, George Yarrall, was an immigrant from New Zealand who worked as an engraver at Morris Jewelry in Bowling Green, KY.  Yarrall not only kept the colored paper template used in designing the textile, he also recorded in a handwritten note that the quilt was started on July 2, 1933 and finished two years later on December 30, 1935. The Spectrum Quilt is one of four quilts in the Kentucky Museum collection of nearly 200 quilts that are attributed to men.

Comments Off on Spectrum Quilt on View at Shelburne Museum