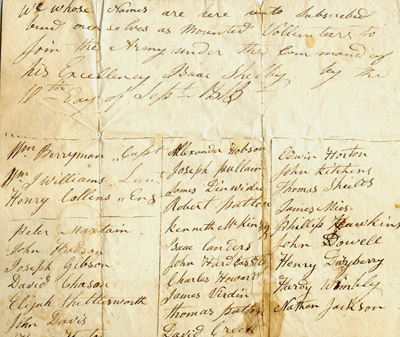 For the United States, the War of 1812 was a “second war of independence” against the British.  For Canada, the war was an important step on the road to Confederation, as the British provinces of Upper Canada (Ontario) and Lower Canada (Quebec) turned back numerous attempts at invasion, and possibly annexation, by the Americans.  Who came out the winner?  The answer largely depends on which side of the border you’re on.  One thing is certain: Kentuckians played a significant role in the war, volunteering in disproportionately large numbers and accounting for more than 60% of the troops killed in battle.

However it may be remembered this bicentennial year (heads up: the Canadians are spending $28 million to celebrate), the War of 1812, like all U. S. conflicts, is represented in the holdings of WKU’s Special Collections Library.  For example, the Lewis-Starling Collection contains a letter relating news of the disastrous defeat of American troops (including 900 Kentucky militiamen) by British and Indian forces at the Battle of the River Raisin.  The Dickerson-Venable Collection includes a copy of William Dickerson’s commission as a lieutenant in the Kentucky militia, and a furlough authorization issued from a camp at Moraviantown (near Chatham, Ontario) on October 7, 1813.  Two days earlier, sitting Kentucky governor Isaac Shelby had led troops there in a key American victory at what would become known as the Battle of the Thames.

In the Hines Collection are letters from James Hines of Warren County, written to his wife in 1814-15 while stationed at Camp Holly near Richmond, Virginia.  Though struggling with illness, Hines was not optimistic about obtaining a furlough.  Rumors were swirling that the Duke of Wellington’s trusted officer, Lieutenant-General Rowland Hill, was sailing to America with fresh troops.  While this proved untrue, it caused “considerable agitation” and the cancellation of all leaves of absence until the enemy’s movements along the east coast could be ascertained.

Click on the links to download finding aids for the collections containing these materials.  For more on our extensive war collections, search TopSCHOLAR and KenCat.

Comments Off on War of 1812 Bicentennial