On November 28, 2012, faculty members of WKU Libraries’ Department of Public Services met in Owensboro Regional Campus Library. The department has a tradition of meeting in one of its regional center libraries once a year. 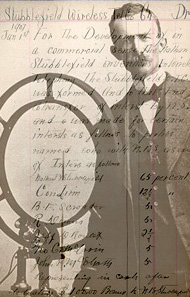 In January 1907, in the middle of a small ledger he used to keep track of his sales, farmer, grocer and inventor Nathan B. Stubblefield (1860-1928) made some highly unusual entries.  Between the accounts for sugar, molasses, peaches and melons was a brief record of the capital and expenses of the “Stubblefield Wireless Telephone Company.”  Stubblefield’s ventures into the wireless transmission of sound would, in fact, give him a claim to the title “father of broadcasting,” and some have even gone so far as to call his home of Murray, Kentucky, the “birthplace of radio.”

According to his biographer Bob Lochte, Stubblefield developed an “electromagnetic induction wireless telephone” independently of better-known inventors like Thomas Edison and Guglielmo Marconi.  After initial acclaim for his invention, Stubblefield sold the rights and began work on a different design, for which he received a patent in 1908.  Indeed, his ledger recorded his trip to Washington, D.C. and his payment of a “first patent fee” of $60.

Despite Stubblefield’s attempts to show that his device improved on earlier inventions, better technology soon rendered it obsolete.  After losing his financial backing and suffering personal reverses, the disillusioned Stubblefield became a recluse.  Upon his death, however, The New York Times remembered his triumphant claim that “I can now telephone a mile without wires” and that his system would “be developed until messages can be sent and heard all over the country, to Europe, all over the world.”

Nathan Stubblefield’s ledger is part of the Manuscripts & Folklife Archives collections of WKU’s Special Collections Library.  Click here to download a finding aid.  For more of our collections, search TopSCHOLAR and KenCat.

Comments Off on Edison, Marconi . . . and Stubblefield