“Conditions Could Not Be Worse” 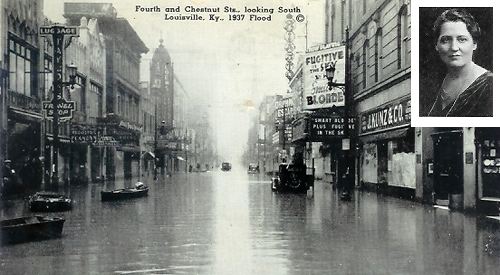 As the Colorado rainwaters recede, we remember that Kentuckians are no strangers to floods.  One of the worst occurred early in 1937, when record rainfall swelled the Ohio River from Pennsylvania to Illinois.  Louisville, Kentucky, where the river eventually crested at 57 feet above flood stage, was one of many communities to suffer severe damage.

In the face of the growing disaster, Mary Taylor Leiper (1885-1973), a librarian at WKU, left Bowling Green with a motorcade of about 200 other cars to help evacuate Louisville residents made homeless by the flood.  In a letter to President Henry Hardin Cherry’s wife Bess, she vividly described what she encountered.  Arriving in Louisville, she was directed to a spot at the water’s edge where rescue workers pulled up in a boat and deposited in her car an 84-year-old man and his nurse.  Clutching his little Boston bulldog, the man was grateful for having survived three days in a house surrounded by water–and, Leiper’s nose told her, more than a week without a bath.

Leiper witnessed the grim conditions in the refugee centers: no heat or light, little water, and “shanties” set up in the middle of the street and connected to sewer lines to serve as toilets.  Finally, she set out for Bowling Green carrying “four lovely people,” a couple and their grown son and daughter.  At the end of the four-hour drive, Leiper took them to a church for food and coffee, then to the Armory for beds, the gymnasium at WKU having already been filled to capacity.

As she was leaving, Leiper described running into four other refugees, “old maid sisters” who, despite the circumstances, proved to be “the most attractive and interesting people” she had met in a long time.  She put them up in her own house for the next two days, where the women related harrowing stories of moving from place to place as the flood waters rose.  But they also made their hostess laugh as they told of watching two soldiers struggle to lift a 325-lb. woman into a truck, and of agreeing that if “Christ was not too good to be born in a manger,” then surely they could accept transportation in a railroad boxcar.  “I can never tell of the joy that we all got during the time these women were with me,” Leiper wrote, marveling at their courage and sense of humor.

Along with many other citizens of Bowling Green, Leiper spent days serving food, obtaining clothes (the four sisters helped alter some of her late husband’s suits to fit the two men she had taken to the Armory), and arranging for hot baths.  But her experiences with Louisville’s flood victims taught her that “there is a funny side to it all as well as a tragic one.”

Mary Leiper’s letter is available in the Manuscripts & Folklife Archives section of WKU’s Special Collections Library.  Click here to access a finding aid.  For more on the Ohio River flood of 1937 and other Kentucky floods, search TopSCHOLAR and KenCat.

Comments Off on “Conditions Could Not Be Worse”