It was a disaster rarely spoken of today, yet it killed more Americans than all of our 20th-century wars combined.  Over 10 months alone in 1918, a vicious strain of influenza took the lives of more than half a million in the United States, and some 30 million worldwide.  Today, as many obtain their routine vaccination in anticipation of flu season, it is difficult to imagine such a sudden and destructive plague. 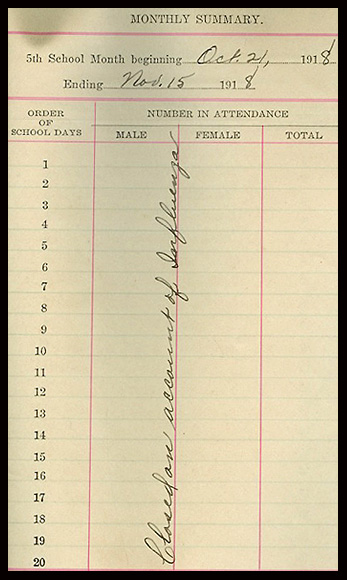 But evidence of influenza’s shadow, especially in the terrible autumn of 1918, is preserved in several collections in the Manuscripts & Folklife Archives section of WKU’s Special Collections Library.  Some Kentuckians seemed to wait in resignation for the illness to strike.  Returning home to Auburn, a correspondent wrote Smiths Grove farmer Carlos Moore of a passenger “on the train last night almost dead with ‘Flu.'”  She was planning another trip the next week, “if I don’t take the ‘Flu.'”  Butler Countian Stella (Phelps) Minton and her family became so ill that her 7-year-old son had to assume all household duties.  Grief-stricken when two other sons died, Stella and her husband kept a small trunk filled with the boys’ belongings for the rest of their lives.

Entire institutions shut down in an attempt to curb the epidemic.  “The flu is on again here pretty badly,” wrote Cumberland County Circuit Court clerk Nevins Hume to a litigant in November 1918; consequently, “we did not have any Court, and will not have any until March.”  Scottsville teacher Eva Dalton recorded lines of zeroes in her attendance register as her school was “closed on account of influenza.”  Naomi Strum reported to her soldier husband that the Webster County schools were closing; nevertheless, she assured him there was “no danger in me taking it for I am not going in a crowd until it is over.”

The flu, of course, gave soldiers and their families additional cause to worry about one another in the closing months of World War I.  Serving overseas in December 1918, James McWherter heard from his father in Monroe County that the “The flu is still here, some are still dying with it.”  Drucilla Short wrote her brother George Harris in October that “influenza has put a ban on all churches, theaters and schools.”  Unfortunately, Drucilla’s letter was returned, for her brother had also lost his life–not to the flu, but to battlefield wounds.

Click on the links to access finding aids for these collections.  For other collections relating to the 1918 influenza epidemic, search TopSCHOLAR and KenCat.