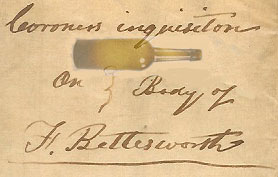 They assembled on June 11, 1846 at the Bowling Green home of one Fielding Bettersworth, recently deceased.  The task of the twelve citizens was to determine, at the behest of the Warren County coroner, the “when where how and after what manner” said Bettersworth departed this life.  Having found no “marks of violence on his body,” and presumably having made such further and other inquiries as they deemed necessary, the panel concluded that the deceased had come to his end “by falling in water and mud and drowning being intoxicated at the time.”

The Manuscripts & Folklife Archives section of WKU’s Special Collections Library holds many other inquest reports in a large collection of Warren County court records currently being processed.  Dating as far back as 1798, they include findings of death by routine misadventure–overindulgence in spirits, drownings, accidental gunshots, fires–or foul play, but also by more mysterious means.  Take the 1811 case of a man found dead two miles west of Bowling Green, about 50, average height, “very corpulent,” with “no teeth in the under jaw except the eye tooth on the right side,” two fingers missing from the left hand. . . and a pair of bridle reins drawn tight around his neck.  After describing in detail the man’s clothing and property, including “money amounting to about $75,” and finding that he had been travelling through the area with several other gentlemen, the inquest determined that death came after he “was strangled by the bridle reins, either by his horse or his company.”

Click here to access a finding aid for the inquest report on Fielding Bettersworth.  For other collections of Kentucky court records, search TopSCHOLAR and KenCat.

Comments Off on Bad Horse or Bad Company?