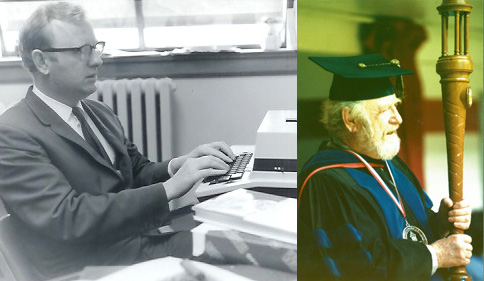 Some might remember Dr. Carlton L. Jackson, who died on February 10, as the young bespectacled history professor who first walked the Hill in 1961.  Others might remember him as that smiling, bearded bear of a man who, as the University’s most senior faculty member, had the honor of carrying the new WKU mace at commencement in 1998.

In the Manuscripts & Folklife Archives section of WKU’s Special Collections Library, we remember Dr. Jackson as a prolific author of more than 30 books.  His works covered a variety of subjects and included A Generation Remembers: Stories from the Flu, 1918; Presidential Vetoes, 1792-1945; The Dreadful Month, about a 1907 epidemic of Kentucky mine disasters; Forgotten Heroes: The Sinking of the HMT Rohna; and P.S. I Love You: The Story of the Singing Hilltoppers, about WKU’s own chart-topping quartet.  In many cases, upon completion of a book project Dr. Jackson generously donated to us much of his research and related materials.

Black History Month is a good time to recall Dr. Jackson’s ground-breaking book Hattie: The Life of Hattie McDaniel, a biography of the actress best remembered for her portrayal of “Mammy” in the movie Gone With the Wind.  The first African American to win an Academy Award, Hattie McDaniel (1895-1952) performed in more than 300 movies and starred in the popular radio program Beulah.  She faced many obstacles as an African-American actress in the early 20th century, and endured criticism from the NAACP for appearing mostly in the roles of a maid or cook.  But, after stealing scenes in Gone With the Wind, earning an Oscar, and counting some of Hollywood’s biggest stars among her friends, Hattie could famously reply, “I’d rather play a maid than be one.”

For further information on Carlton Jackson’s papers in WKU’s Special Collections Library, e-mail mssfa@wku.edu.  For more of our collections, search TopSCHOLAR  and KenCat.

Comments Off on Dr. Carlton Jackson