To Speak of All Things As They Are 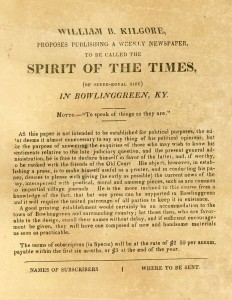 Determined to start a non-sectarian, non-political newspaper in Bowling Green, Kentucky, William B. Kilgore issued a broadside in late-1826 soliciting subscribers.  In the advertisement he declares “it almost unneccesary to say any thing of his political opinions”, because the paper was “not intended to be established for political purposes.”  Contrary to his stated resolve, Kilgore quickly  avers “himself in favor” of the Old Court, referencing a political imbroglio that devisively affected Kentucky politics for decades.

Instead of political diatribe, Kilgore committed his paper to presenting “current news of the day, interspersed with poetical, moral and amusing pieces, as are common to impartial village journals.”  The veracity of his reporting was reflected in his paper’s motto:  “To speak of things as they are.”  Kilgore implored those interested in such a publication to “enroll their names without delay,” and if enough subscribers enlisted he promised he would deliver a newspaper “as soon as practicable.”  Subscribers could pay $2.50 in cash within the first six months of publication, or they could delay payment until the end of the year and pay the full subscription of $3.00.

Kilgore acquired enough subcribers to initiate his endeavor, for on Saturday, 25 November 1826, the first edition of his Spirit of the Times appeared.  Like most local papers of the era, it contains little  local news.  In a town of less than 800 people, everyone already knew each other’s business.  Still, advertisements for local businesses, governmental notices, political announcements, and lists of those having letters at the local post office are of great interest to local historians and genealogists.  The remainder of the newspaper was filled with serialized stories, old national and international news, poetry, and even less noteworthy filler.

One item of interest in the first issue related to the newspaper’s appearance.  “We regret to have occasion to apologize,” wrote Kilgore, “for our maiden sheet not appearing in as handsome dress as we intended in consequence of an unlucky oversight in those who furnished us with type not sending a sufficient quantity of the letter (w) which renders the balance of the fount [font] useless for a time. The deficiency we hope will be supplied in two or three weeks at farthest.”

This fascinating piece of Bowling Green history was discovered as the Lanier Family Papers were being processed in the Manuscripts & Folklife Archives unit within the Department of Library Special Collections.  Fortunately the Kentucky Library Research Collections owns what is believed to be a complete run of the newspaper, in both original copy and microfilm, from its maiden issue to November 1827.  To find other collections related to Bowling Green’s past or to the history of Kentucky journalism, search finding aids to our collections in TopSCHOLAR.

Comments Off on To Speak of All Things As They Are