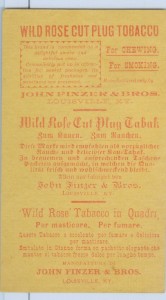 The Kentucky Library Research Collections recently added a piece of ephemera which reflects the historic diversity of tobacco customers. Louisville, Kentucky, in particular, was settled by significant numbers of immigrants from northern and western Europe in the decades prior to the Civil War. Five brothers from Canton Berne, Switzerland immigrated to Louisville as boys and learned the trade of manufacturing plug tobacco by working in local factories. In 1866, they began a small factory known as the Five Brothers Tobacco works. As the company grew to become the largest tobacco factory in Louisville and achieved the rank of fifth in importance in the United States, it was renamed J. Finzer and Brothers. By 1887, it employed up to twelve traveling salesmen, who were responsible for making its trade in the Eastern states greater than any other tobacco factory in the West.
Previously the Kentucky Library Research Collections included a February 1886 issue of Retail Tobacconist, J. Finzer and Brothers’ trade paper. Now we are pleased to add an advertising card printed in English, German and Italian marketing Wild Rose Cut Plug Tobacco. This acquisition demonstrates our commitment to building an International collection which reflects the diverse communities that have long made up Kentucky.