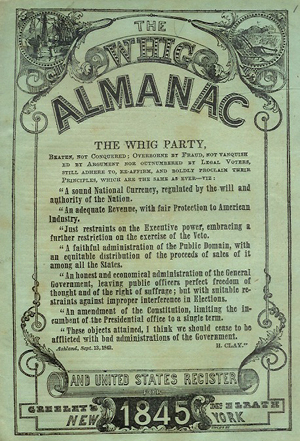 Before its demise in the mid-19th century, the Whig Party sent four men to the White House.  In 1844, the Whigs and their candidate, Kentuckian Henry Clay, were the choice of 16 prominent Warren County citizens, who made their case in an open letter to fellow voters.  Most of their rhetoric still infuses political debate today, and could be republished with only the date revised:

The time has come when the American people should feel and know that this great great country of theirs, belongs not to office holders and office seekers, but to them.

A most momentous crisis is at hand in the history of our beloved country…Great principles are in issue.

The Whigs are the advocates of an AMERICAN tariff…discriminating in the amount of duty imposed, between those articles which the American citizen can manufacture or produce and those which they can not…  Providence…has filled our mountains and our plains with minerals…and given us a climate and soil for the growing of hemp and wool.  These being the great materials of our national defence, they ought to have extended to them adequate and fair protection.

The Whigs are in favor of a well regulated Bank of the United States; of a reduction and reform of the expenditures of Government, and a modification of the executive powers of the President.

Remembering that we are one people, in town and country all the same, elevated by the same prosperity, depressed by the same misfortunes, subject to the same laws and warmed by the same patriotism, let us unite together as one man [sic] around our principles and sustain our men [sic] and our measures by our suffrages at the polls.

A typescript of this Whiggish appeal is part of the Manuscripts & Folklife Archives collections of WKU’s Department of Library Special Collections.  Click here to access a finding aid.  For other collections about elections, search TopSCHOLAR and KenCat.  And don’t forget to vote!

Comments Off on The Whig Ticket