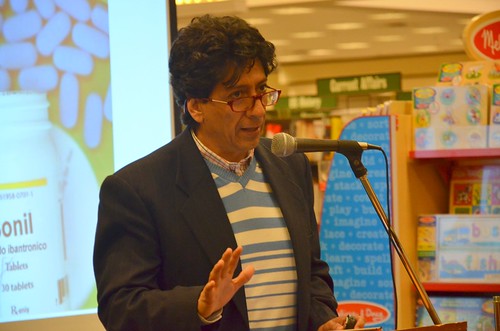 After speaking at the Gary Ransdell Hall on WKU campus as part of the “Tracing the Unexplored: An Ecuadorian Tapestry” series in the afternoon of March 26, 2015, Ecuador’s most famous “caricaturist” Xavier Bonilla,  also known as “Bonil,” spoke for the WKU Libraries-sponsored “Far Away Places” speaker series off campus at the Barnes & Noble Bookstore in Bowling Green on the evening of the same day.

Only days after the tragedy at the office of Charlie Hebdo, Ecuador’s most famous “caricaturist” Xavier Bonilla,  also known as “Bonil” was scheduled to appear in court on January 12, 2015 for violating Ecuador’s controversial Law on Communication. The Ecuadorian government postponed the case in lieu of drawing more international criticism to Ecuador’s current president Rafael Correa and his personal conflict with the political cartoonist. Later, Bonil was sanctioned for his controversial cartoons published in the country’s main newspaper “El Universo” which mocked an Assemblyman Agustin “Tin” Delgado not for his humble origins but for his excessive governmental salary. This was the second time “El Universo” was sanctioned for using humor to provide a unique perspective on governmental issues. El Universo was fined $93,000 in January, 2014 for a cartoon about a heavy handed police raid on the home of an opposition journalist /advisor.

These incidents have vaulted “Bonil” onto the international stage and where last week he was a featured speaker in Washington, D.C. at the Center for Investigative Journalism in the Americas.

Bonil recently came out with his 8th book Bonil Cartoons which is a compilation of his works selected from hundreds of cartoons originally published in various print media over the past three decades. The book is organized under six major themes: social media, romance, reading and writing, money, protests of ideology and ironically (and appropriately) ends with death. His target audience ranges from young adults to senior citizens as his motifs are universal ideologies which touch on commonplace situations with some scenes that might require parental consent if showing to young children. While some of his cartoons have Spanish dialogue, many are bilingual, use plain English or just don’t have any dialogue at all which makes them easy to understand. Many of his themes are international and universal in nature, which allow the viewer or reader to quickly pick out the details and understand the context and the joke. Although Bonil is from Ecuador and highly involved in journalism issues of that country, most of his book is not specific to any country.

His clever depictions of everyday inanimate objects such as nails and screws challenges our notions of what does and doesn’t fit into our beliefs of what’s right and wrong with society. Many times we hold ourselves back from saying what we truly feel, and in one cartoon, his character is literally holding his tongue back.

Bonil will speak on campus at WKU’s Gary Ransdell Hall, room 1074 on Tuesday, March 24 at 4:00 p.m. as part of the “Tracing the Unexplored: An Ecuadorian Tapestry” series with a reception to follow.

Bonil will also speak for the WKU Libraries sponsored Far Away Places Speaker Series off campus at the Barnes & Noble Bookstore at 1680 Campbell Lane in Bowling Green on Thursday, March 26 at 7 p.m. For questions call (270)745-6121. Everyone is invited. Swipeable for WKU students.