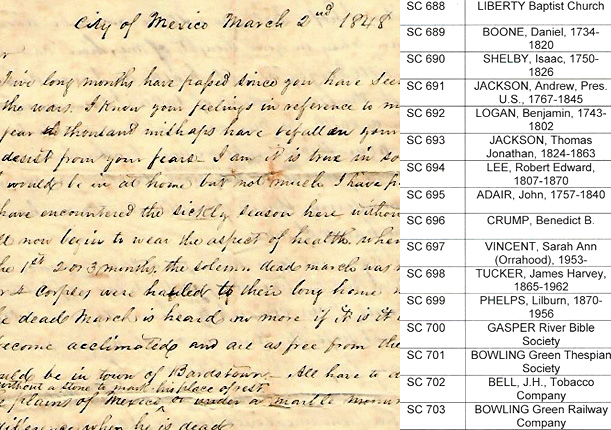 What do a Chinese laundryman’s account book, a receipt signed by Daniel Boone, a diary describing an 1847 visit to Mammoth Cave, letters from a repatriated slave to her former owner, and a handwritten Shaker hymn book have in common?

We recently achieved a milestone when we catalogued our 3,000th small collection.  We wanted the designation of SC 3000 to go to a significant acquisition, and found one in the papers of Charles Ewing Nourse (1826-1866) of Bardstown, Kentucky.  The highlight of the ten items in this collection are three highly descriptive letters written by Nourse during his service in the Mexican War, a conflict in which Kentuckians fought but which is far less well-documented than, say, the Civil War or World War II.

From the oldest (SC 1419), a 1781 letter of Revolutionary War soldier Nathaniel Lucas to his sweetheart just before the decisive Battle of Yorktown, to the newest (SC 2994), a 2016 guide to walking trails in the Great Smoky Mountains National Park co-authored by retired Bowling Green attorney Ray Buckberry, our small collections, in terms of their variety, historical significance, and educational value, are much bigger than they appear.  Click on the links above to download finding aids, and search TopSCHOLAR and KenCat for finding aids to the other 2,995 or so!

Comments Off on 3,000 and Counting