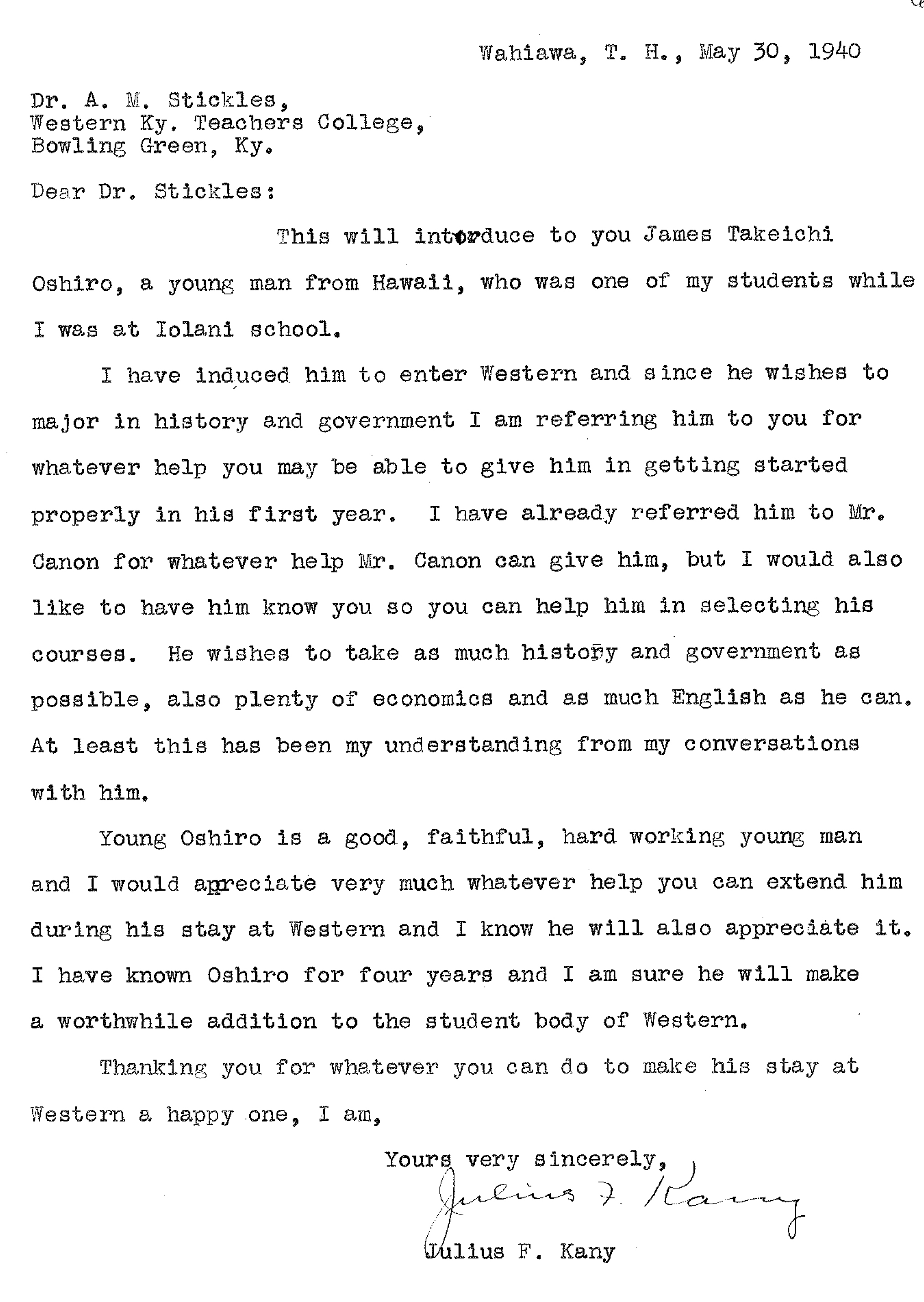 In the official history of WKU, Lowell Harrison described James Oshiro and his situation. “Born in Hawaii of Japanese parents, he lived in Japan for sixteen years before returning to Hawaii. Nine years later he was persuaded by a Western alumnus to go to the Hill. The short, slight, twenty-six-year-old student enrolled in September 1940 to major in history. His financial support from a brother-in-law in Honolulu was suddenly cut off after the Pearl Harbor attack, and no one could predict the reaction of Western students and Bowling Green townspeople. ‘It breaks my little heart even to think of this horrible war between two nations,’ James wrote President Garrett in late December; he would gladly fight for the United States, ‘and I am sure that God will forgive me having fought against my parents’ country.’” (2) 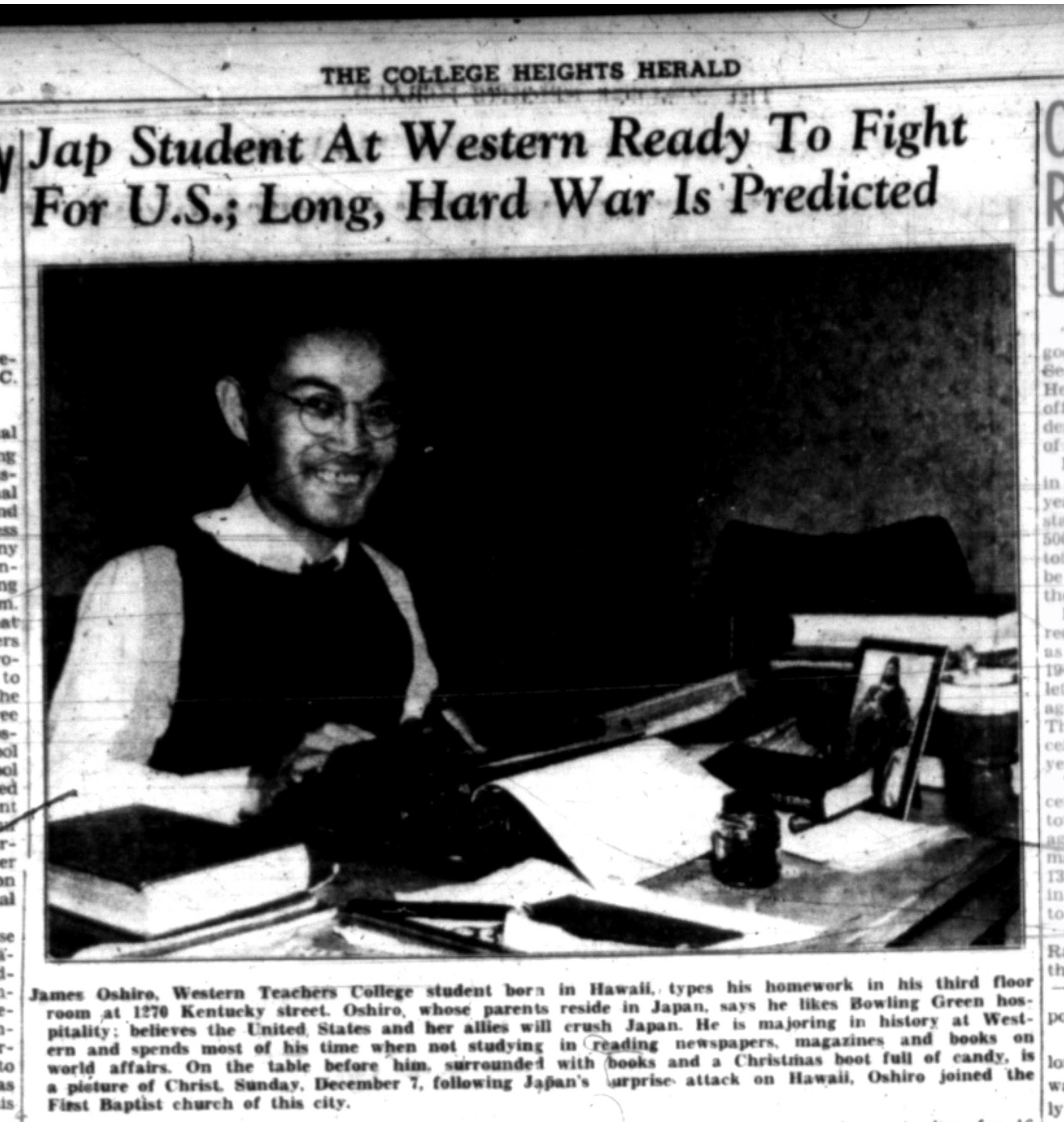 But, Japanese-American men were excluded from the draft in January 1942 and in February the United States government began moving Japanese American citizens, and others of Japanese descent, from the western region of the United States into internment camps.  (For more information about one of these camps, please visit the Manzanar National Historic Site)

Dee Carl Perguson, Jr., a classmate and fellow history club member, mentioned James Oshiro briefly in his diary entry on February 25, 1942. Perguson wrote, “Martel Hale, Jimmy Stickles, and James Oshiro the Jap walked down the street with Frances and me. There are rumors that several of the faculty members feel it unwise to let the Jap boy, or man rather, continue in school. He is under the eye of the FBI at all times whether he knows it or not. To win this war, hate [for] the Japs must be developed among Americans and hate against a race cannot easily be selective in the matter of hating only a certain section of a race whose color, features, size, etc. we are taught to hate. Although this student is an American by birth and probably a loyal citizen (he was born in Hawaii), he is yellow, slant eyed, very short, and speaks with an accent; the characteristics which Americans will grow to hate. That will be unfortunate for Western’s student. How soon that hate will develop one cannot say, but from rumors I doubt whether James Oshiro can stay in school the remainder of this semester. That, of course, is my guess. At present with his connections with Hawaii cut off, Oshiro is being furnished a room by the school and he works for his meals, in fact the school is financing him.” (3)

Harrison continued his description, “Garrett asked the students to understand Oshiro’s peculiar circumstances, and the only incident occurred when a drunk went to the Baptist church ‘with the announced intention of killing a Jap.’ Garrett gave Oshiro a room and a job in the president’s home, and in December 1943 James Oshiro became a Western Graduate.” (2)

Possibly indicative of the support he received, Sam Steger, author of a regular column in the College Heights Herald called Hilltopics, wrote, “When Somebody Asks Me….to hate the Germans and the Italians and Japs who live here.  I answer: I love America, and these folks helped to make it. I don’t see why I should hate people just because a handful of their countrymen back home have set out to murder and plunder the world. And besides, I can’t hate folks who gave us swell tasting wiener schnitzel, spaghetti and ravioli and suki-yaki. As a matter of fact, I can’t hate any country or its people, because I like corned beef and cabbage, and caviar, and smogersborg (sic) and Hungarian goulash, and sardines and antipasto, and French fried potatoes, and chili con carne, and pickled herring – and that takes in a whole lot of folks. No dictator can make me lose faith in humanity regardless of nationality.” (4)  Steger’s editorial comments appear in the same issue of the Herald with Oshiro’s interview (link above).

Indeed, Oshiro was in the Congress Debating Club from February 20, 1941, to May 1942 (including an appointment to the attendance committee for a five-week term on March 13, 1942) and the Stickles History Club from Fall 1942 to Fall 1943 (including serving as sergeant-at-arms for the Fall 1943 semester) and joined the local Baptist Church.  It seems that he was active in the clubs and not just begrudgingly allowed to attend.  The Congress Debating Club minutes for February 20, 1942, indicate, “The program consisted of two speeches by the now Senator Oshiro and Senator Stickles. The first spoke on ‘Aid to Russia’ with an excellent discussion and the latter on ‘Aid to Allies.’ …The names of citizen William Jack Corman and James Oshiro were voted upon and accepted unanimously.” (5)  The Stickles History Club minutes for February 11, 1943, indicate not only participation but interest in his specialized knowledge, “The program was presented by vice-president James Barry. Bob Cochran and Edgar Minford debated on the question: should the government of Japan be destroyed after this war? Cochran upheld the affirmative while Minford argued the negative. James Oshiro then spoke on the emperor of Japan and his powers, following [which] he answered questions posed by the audience.” (6)

While Westerners seemed generally supportive, the larger context was one of hostility toward Japanese Americans.  Garrett acknowledged this in a letter to H.W. Tribble on July 2, 1943 (7): 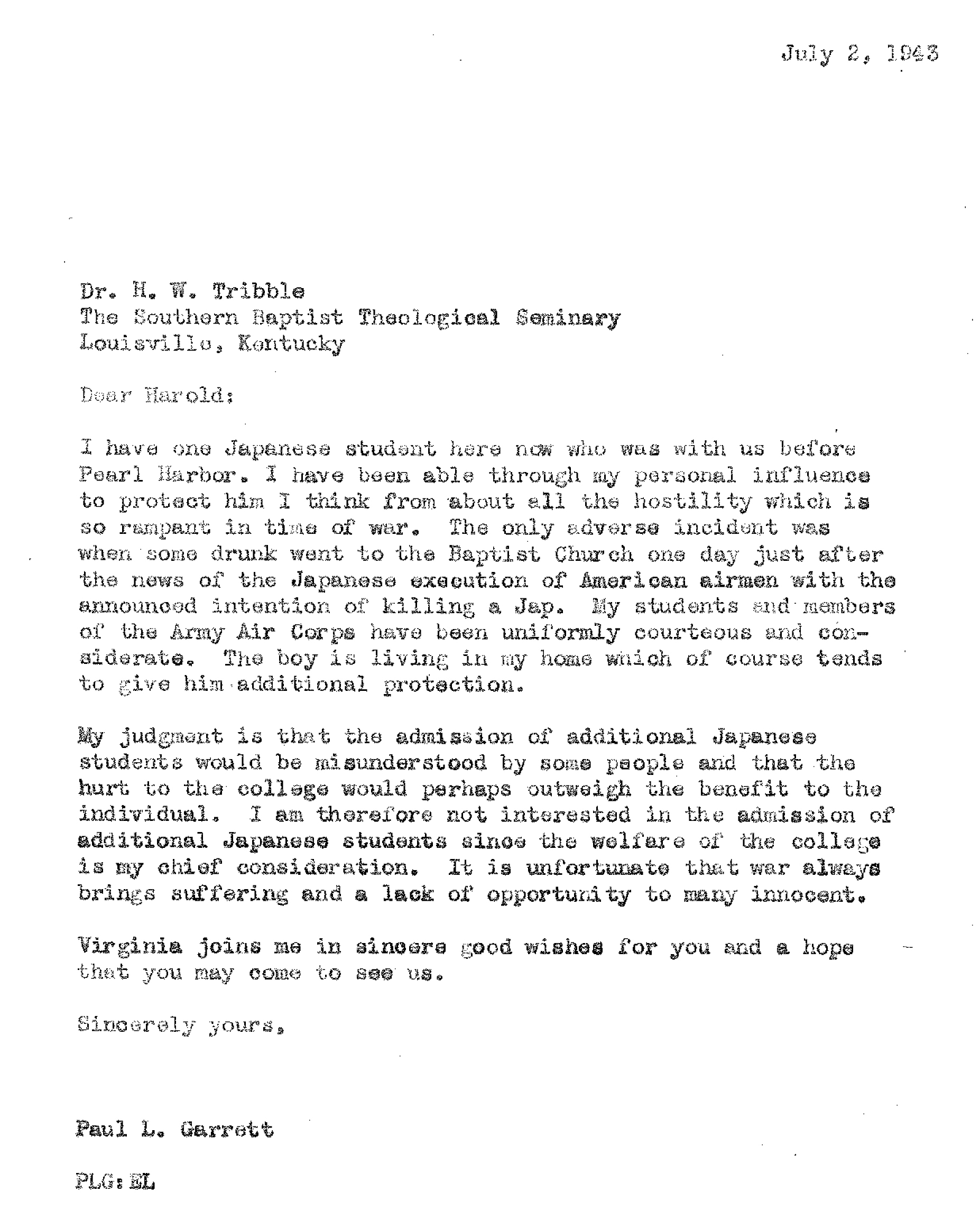 Due to the help of his friends at Western, James Oshiro graduated from Western in December 1943.  After a brief time in New York, he spent the next few months in Minneapolis, Minnesota, attending Bible school.  By the end of 1946, he was back in Hawaii.  His correspondence with Paul Garrett, president of Western, during 1944 unfailingly mentioned how grateful he was for the assistance he received while he was a student and how he appreciated the kindness shown to him during his time here.  (8)