“Abe will be reelected”

It was November 12, 1864, and members of the 12th Kentucky Infantry were pondering the results of the presidential election held four days earlier.

Camped near Spring Hill, Tennessee, William Ballew wrote to friend Thomas Hopkins in Clinton County that his regiment had shown a strong preference for “Little Mac” – the nickname of President Abraham Lincoln’s challenger, Major General George B. McClellan.  Earlier, Lincoln had relieved McClellan of his command after becoming frustrated with his innate caution and failure to produce results on the battlefield.  Though popular with the average soldier, McClellan had run for president as the candidate of a Democratic Party hobbled by its split over what to do about the war.

While Pvt. Ballew himself was unsure which candidate would “be the best for the US,” he claimed access to a “decision desk” of his own, namely the votes of the African Americans in Nashville.  Five thousand of them, he reported, had “voted for abe.”  Ballew forecast “that if the election is carryed on every whare like it was in nashville that abe will be reelected for the negroes had the same privalege of voteing that the white man has.”

Ballew didn’t realize that what he had witnessed was only a mock election, conducted by a still-disenfranchised community demonstrating its intention to secure the “privalege” of the vote.  On Election Day, about 3,200 African Americans had assembled on College Street to participate in a symbolic poll that gave all but one of their votes to Lincoln.  The initiative came after a delegation of Tennessee freedmen returned from the National Colored Men’s Convention in Syracuse, New York determined to press their demands for equality and the abolition of slavery.  It turned out, of course, that their “votes” were prescient. While McClellan carried Kentucky, he secured only 45% of the national vote and lost the election to Lincoln.

William Ballew’s letter is part of the Manuscripts & Folklife Archives of WKU’s Department of Library Special Collections.  Click here to access a finding aid and typescript.  For more collections relating to the Civil War and elections generally, search TopScholar and KenCat.

Comments Off on “Abe will be reelected”

“Just retribution! but how awful!”

“Horrible!” wrote Sallie Knott on April 15, 1865.  The previous evening in Washington, D.C, President Abraham Lincoln had been shot at Ford’s Theater and Secretary of State William H. Seward stabbed by unknown assailants.  At home in Lebanon, Kentucky, Sallie sat down to record her reactions in her journal.  But it wasn’t easy to sort out her thoughts, for at the outbreak of the Civil War she had made one thing clear to that same journal: “I glory in the name of Rebel.”

As a young schoolteacher in Bowling Green, Kentucky, Sallie had developed a disdain for Northern attacks on her state’s way of life.  Her anti-Yankee sentiments grew after she married her cousin James Proctor Knott in 1858 and moved to Missouri, where he was a lawyer and state legislator.  In 1861 Knott, now Attorney General of Missouri, was stripped of his office for declining to take an oath not to “aid the Southern cause,” and the couple was forced to return to Kentucky.

For the next four years, Sallie remained largely true to her promise to confine her journal entries to personal affairs, but the news from Washington demanded comment.  Sallie could not restrain her sense of triumph.  “Just retribution!  but how awful!” she declared.  Lincoln had proclaimed the previous day “a universal Thanksgiving day,” but “while his partisans were feasting & making merry, by his own order, over the misfortunes of a brave & oppressed people, he & his chief director & adviser in all his fiendish schemes, are dying!  Lord, thou art just & holy; & thy judgements infinitely surpass our desires or comprehension.”

Her thoughts then turned to the identity of the perpetrators.  Of course, fingers pointed to Southerners as “the prime movers in the plot,” but Sallie put her money on General Ulysses S. Grant who, “with the army at his back, is going to try to make himself sovereign & absolute!”  Grant had accepted Lincoln’s invitation to attend the play at Ford’s Theater, she noted, but then backed out and left town.  And like Americans who, after President Kennedy’s assassination, rejected the “lone gunman” theory, she saw conspiracies in the shadows.  “Why,” she asked, “was there no attempt to arrest either assassin by guards, servants, police, nor a theatre full of people?”

Would “a terrible struggle for absolute power & the rights of the people” now ensue, with the army on the side of despotism”? Sallie wondered. “ Let us be still & see!”  In the meantime, she had to hold her tongue around grieving family and friends and at her church’s memorial for the martryed president.  “No heathen Juggernaut ever received so much devotion as we have been obliged to offer at the shrine of Abe Linkhorn’s dead, ugly old phiz!” she sputtered.  “Bah!  ‘tis perfectly sickening!”

Sallie McElroy’s journal is part of the holdings of the Manuscripts & Folklife Archives of WKU’s Department of Library Special Collections.  Click here for a finding aid.  Search all our collections through TopSCHOLAR or KenCat.

Comments Off on “Just retribution! but how awful!”

“Our Day of Affliction”

Late in April 1865, the nation was still reeling from the assassination of President Abraham Lincoln on April 14.  Twelve days after the tragedy in Ford’s Theater, Union soldiers had tracked fugitive killer John Wilkes Booth to a Virginia farmhouse, set it on fire, then apprehended Booth after he was shot in the neck.  Booth died a few hours later.

On April 21, as the funeral train departed Washington D.C. for interment of Lincoln’s remains in Springfield, Illinois, Kentucky Governor Thomas E. Bramlette issued a proclamation declaring Thursday, May 4 as a “day of Fasting, Humiliation, and Prayer” for the citizens of his state.  The “sad calamity which has fallen upon our country,” read the proclamation, called upon “us as a people to humble ourselves before a Merciful God, and pray Him that the sin of our people, which has culminated in such great crime, be forgiven.”  He asked Kentuckians on that day to “suspend all secular business, and, at the usual hour for service, attend their respective places of worship, and engage in the solemn and earnest observance of the day. . . in this our day of affliction.”

A facsimile of Governor Bramlette’s proclamation is part of the Manuscripts & Folklife Archives of WKU’s Department of Library Special Collections.  Click here for a finding aid.  For other collections relating to Lincoln and the assassination, search TopSCHOLAR and KenCat.

Comments Off on “Our Day of Affliction” 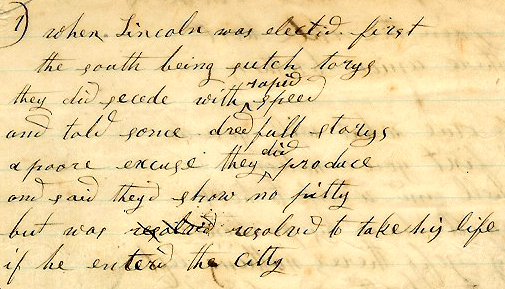