In his paper titled “Notes and Speculations on Country Auctioneering as It Is Practiced in North Central Kentucky,” former Western folk studies student Joseph King attempts to frame auctioneering as an expressive lyrical performance similar to folk singing or folk preaching. King examines specifically the country auction and draws a stark contrast against the “sedate art auctions and auctioneers in urban areas.” His descriptions of the auction sites—often farm houses, barns, and churches—the goods being sold—“…anybody can haul in a load of anything, an old mule, a load of manure, six bags of wilted lettuce, old fruit jars…”—and the people in attendance—“…the auctions are a place to talk to your neighbor, a chance to look at his wife when she is ‘fixed up’ a little (clean overalls and freshly ironed dresses seem to be de rigueur at these events”—are heavy-handed and patronizing, but King’s argument relating the art of auctioneering to a musical performance may hold some weight.

During his fieldwork investigation, King visited several auctions throughout North Central Kentucky, gathering information on specific auctioneers, their professional training (or lack thereof), and their highly stylized “calling” techniques. He also recorded auctioneers on a single reel-to-reel audiotape at live sales in order to analyze individual idiosyncrasies and highlight further connections between calling and singing. King’s most salient point is the study of the auctioneer’s chant. He writes,

“The auctioneer’s chant is infused with a strong measure rhythm. A heavily accented syllable is uttered at periodic intervals (a trained musician could probably give the exact rhythmical time for any auctioneer). There is, perhaps, a semblance of a monotonous tune…the chant, however, does not sound particularly musical because of the harshness of the auctioneer’s voice and the lack of variation.”

As with most folk traditions, the emphasis is on oral transmission—informal knowledge passed from one person to another; however, King also notes that a handful of auctioneers he spoke with attended an auctioneering school where courses were taught by highly trained professionals in the field. Nevertheless, King asserts that the sales, and by extension the auctioneer, “express community values” and serve as a release valve for locally-situated tensions and anxieties. Perhaps a slight stretch, but King’s conclusions offer further points of inquiry concerning the intersection of folk music, identity, religion, and craft. 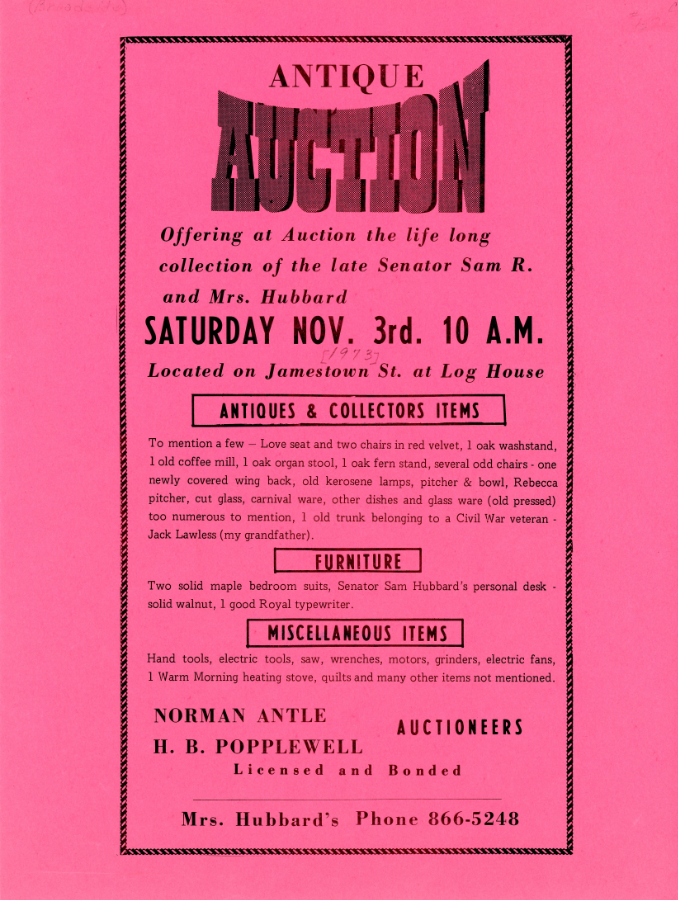 The paper itself (FA 1167), located within WKU’s Manuscripts and Folklife Archives, contains newspaper clippings, brief biographical sketches, and a reel-to-reel audio tape of the auctioneers’ chants.

For more information on folk songs, visit TopSCHOLAR or browse through KenCat, a searchable database featuring manuscripts, photographs and other non-book objects housed in the Department of Library Special Collections!