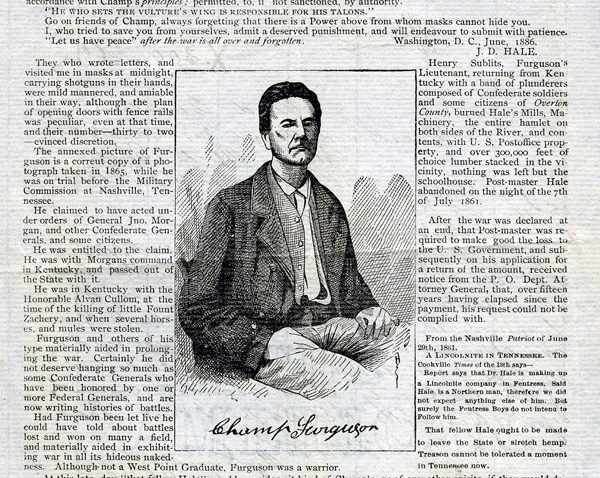 The Civil War as a research topic never ceases to draw interest. The addition of a broadsheet to the Kentucky Library Research Collections adds to our excellent holdings about Champ Ferguson. This sheet features Dr. Jonathan D. Hale’s recollections of the life of the Confederate Guerilla and includes a facsimile of a Ku Klux Klan threatening letter sent to Hale in 1868. The letter received from the Klan in 1868 was sent from Lodge Headquarters in Arkansas, on a “dark and dismal night, from a “muddy Road with BLOOD, BLOOD, BLOOD. The letter issued a strong warning: “This is to notify you that the Spirit of Champ Ferguson still lives, and there are men living that are determined to avenge his death – and you are also aware that your oppressive and wicked acts toward the best citizens of Overton County stand recorded against you -… Prepare to meet your God.”
Champ Ferguson was a personal enemy of Hale and destroyed his home and business. The state of Kentucky, John Hunt Morgan, Alvan Cullom, the killing of “Little Fount Zachery”, Henry Sublits(sic), loss of much property and the loyalties of Ferguson are noted. And that he was worthy of execution by hanging. “The military trial, held in Nashville, Tennessee, lasted from July to October 1865. Ferguson was sentenced to be hanged; he was denied the opportunity to provide a defense on his behalf, and the sentence was carried out on October 20, 1865. Ferguson’s body was turned over to his wife and daughter, who fulfilled his last request which was to be buried at his home in White County, Tennessee, on a branch of Calfkiller Creek.”
Hale would leave Tennessee and live out the rest of his life in New Hampshire having grown tired of being a “damn Yankee.”
See http://www.ajlambert.com/history/ct_hus.pdf
For more information on Champ Ferguson and the Civil War, visit WKU’s Department of Library Special Collections, or contact spcol@wku.edu. For more collections, search TopSCHOLAR and KenCat.

Comments Off on Hale’s Recollections of Confederate Guerilla “Champ Ferguson”