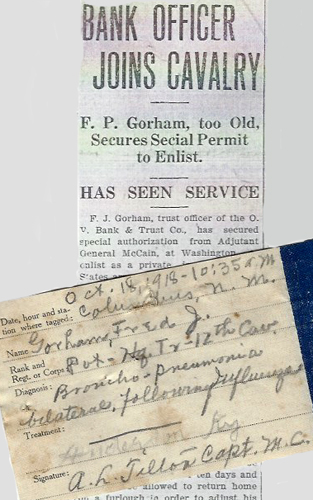 When the U.S. entered World War I, Fred J. Gorham was a 40-year-old bank officer in Henderson, Kentucky, with a wife and young daughter.  But Gorham had also served as a cavalry officer in the Spanish-American War, and believed that his experience would help the Army in training recruits.

After obtaining special permission from the U.S. Army Adjutant General, Gorham re-enlisted in July 1918 as a private.  He was donning the uniform once more, he wrote his aunt, “to render what service I can in the behalf of Democracy against Autocracy, and quell the oppression of violence and outrage against the women and children of the smaller nations of the world.”  He hoped to go overseas, he wrote his brother, and “if I am allowed to ‘Go Over the Top’ once, then I won’t care what happens or where they send me.”

After reporting to Fort Thomas, Kentucky, Gorham’s next stop was an Army base in Columbus, New Mexico.  “Dad,” as his younger comrades called him, quickly earned the respect of the troops as he led them in exercises like target practice.  “You could tell who the Kentucky boys were,” he wrote his mother, “by the way they could shoot.”

But twelve days after that letter, and having assured both his wife and mother that the camp was healthy, Gorham was dead of pneumonia following an attack of influenza.  This veteran of one war and volunteer for another was the victim of a pandemic that, over the next two years, would kill millions worldwide.

Gorham’s remains were interred in Louisville’s Cave Hill Cemetery and his name added to the honor roll of Henderson County’s “Immortal Dead.”  The Henderson Daily Gleaner‘s list, in fact showed more of the county’s sons losing their lives to disease than to battle wounds.

Fred Gorham’s letters and papers are part of the Manuscripts & Folklife Archives collections of WKU’s Department of Library Special Collections.  Click here for a finding aid.  For more Spanish-American War and World War I collections, search TopSCHOLAR and KenCat.

Comments Off on “Dad”