A recent donation to the Manuscripts & Folklife Archives section of WKU’s Department of Library Special Collections widens our perspective on the brief life of Oliver Hazard Perry Anderson, a Frankfort, Kentucky native and successful merchant.

In July 1841, Anderson arrived in southern France after a lengthy sea voyage from parts unknown.  In a letter to his sister Penelope, he described in detail the Straits of Gibraltar, whale sightings, and his landing at the ancient city of Marseilles, followed by a 4-day ride to Paris.  Anderson then took Penelope on an epistolary tour of the palaces, churches and historical monuments of this “magnificent city,” but then claimed, surprisingly, that “I cannot see Paris, I am not well enough” and expressed an intense anxiety to continue on his way home.  The reason: Anderson was dogged by a debilitating tubercular cough, and his travels in search of a remedial climate had given him only occasional relief.

Anderson’s time in the City of Light contrasted remarkably with his experience 15 months later, when he became, literally, a cave dweller.  In the winter of 1842-43, he resided with a handful of other tuberculosis patients in stone cottages inside Mammoth Cave in hopes that the pure, cool air would help his lungs.  Dr. John Croghan, who specialized in the disease and also happened to own the Cave, had constructed the underground sanatorium as an experimental treatment center.

As shown, however, in letters already in our collection dated in December 1842 and January 1843, Anderson found any improvement in his condition to be little more than a mirage.  The darkness and dampness of the Cave and the constant smoke from cooking stoves convinced him, when he finally emerged, that “I would be better out than in.”  Whether in the “upper world” or below it, he struggled with alternating periods of strength and good appetite, then fatigue, cold symptoms, and always, the cough.  He finally succumbed to the disease in 1845 at the age of 32.

Click on the links to access finding aids for Anderson’s letters from Paris and Mammoth Cave.  For more of our collections about Mammoth Cave, search TopSCHOLAR and KenCat.

Comments Off on Upper and Lower Worlds

Though the Kentucky Library and Museum’s major focus has followed our mission statement, “We Collect Kentucky,” our collections can now be characterized as both local and global. A sample of recently cataloged items illustrate this new focus: Institutes of Hindu Law and the History and Antiquities of Carborough, Viciniti: with Views and Plans, The Northern Campaigns and History of the War, from the Invasion of Russia, in 1812, and Memoirs and Recollections of Count Segur: Ambassador from France to the Courts of Russia and Prussia, and Important Engagements Which Took Place Between His Majesty’s Forces and the Rebels, During the Irish Rebellion, 1798., by John Jones. These primary source materials enable researchers to delve into what it was like to live during the earlier centuries by reading these types of first-hand accounts of everyday people, leaders, revolutionaries and their times. For the last title by John Jones, we are among a few libraries that hold this original book including the Universitätsbibliothek Heidelberg and the British Library. Additionally, our unique holdings are now more accessible through our “KenCat” catalog which uses the collection management program, PastPefect. The collection is searchable online at http://wku.pastperfect-online.com/35749cgi/mweb.exe?request=ks and covers a wide variety of materials in four areas: objects, archives, photographs and library materials. For more information about these unique collections contact klmref@wku.edu or 270-745-5083. 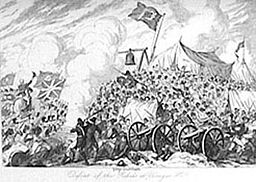