Early in the morning of Sunday, April 6, 1862, Confederate soldiers surprised an encampment of troops under Ulysses S. Grant at Shiloh Meeting House, two miles inland from Pittsburg Landing, Tennessee.  Thus began the Battle of Shiloh, a clash that would shock the nation with its nearly 24,000 casualties—making it the costliest battle in American history up to that time.  Among those killed was Confederate General Albert Sidney Johnston.  The previous fall, Johnston had set up headquarters in occupied Bowling Green, Kentucky, and his name is now associated with the fortification that once occupied the Hill on WKU’s campus. 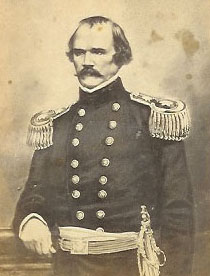 One of the witnesses to the destruction at Shiloh was Jacob W. Davis of McLean County, Kentucky.  After suffering the loss of his wife, the disconsolate farmer had left his small daughter in the care of his brother George and enlisted in the Union Army.  In a letter to George written a few days after the battle, Davis reported hearing the “roar of cannon” that Sunday from his camp nearby.  The next day, as Davis’s company waited to cross the Tennessee River, the battle resumed with “uncommon fury. . . and raged with all terror that can be imagined for it cannot be described.”

Finally, Davis crossed the river on Tuesday and surveyed the battle scene.  The ground “was covered with carnage,” and he was sickened “at the awful sight of men & horses in confused heaps putrifying together.”  He estimated the losses on both sides to be in the thousands, and learned from comrades that the recent battle at Fort Donelson “was nothing to this.”  Small gangs of Confederates remained in the area, he reported, shooting stragglers from the Union side and mutilating their bodies.

Despite the horrors, Davis cast his mind back home to his deceased wife Katherine and their small child.  “If heaven so wills that I never get back,” he wrote George, he was to place a proper headstone on Katherine’s grave and “take special care” of “poor little Ada.”  Those duties would indeed fall to George, as Jacob now lies buried in Shiloh National Cemetery. 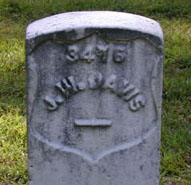 Jacob Davis’s letter is part of the Manuscripts and Folklife Archives collections of WKU’s Department of Library Special Collections.  A finding aid and typescript can be downloaded here.  For more collections relating to the Battle of Shiloh, search TopSCHOLAR and KenCat.  Click here to browse all of our Civil War collections.

Comments Off on “Covered with Carnage”