Max Nahm; the Nahm home, site of a murder

It was a domestic tragedy that devolved into a spat about domestic servants.  On June 7, 1945, Sadie Brown, the longtime African-American cook of prominent Bowling Green banker Max Nahm, was arguing with a male acquaintance in the kitchen of Nahm’s home at 14th and College Streets.  The argument ended when he grabbed a knife, slashed her throat, and fled.

From her State Street home a block away, Martha Potter wrote the news to her children.  For most of her life, Martha, who kept boarders in her home, relied heavily on African-American domestic servants, but the past few years had been a trial.  Susie Potter, her own longtime cook and maid with whom she shared a surname, had resigned in 1937, and recently the attraction of better-paying war work had made replacements scarce.

But now it was Max Nahm’s turn to experience a “servant problem.”  As the local African-American community reacted in shock to Sadie’s murder, Susie told Martha of their folk beliefs regarding violent death.  “Susie said that murder blood was hard to wash out and that if it wasn’t washed up before the victim’s death it never would come out,” Martha informed her children.  Sally, her current cook, had agreed, adding that “every time there is a thunderstorm that spot will come back.”

A few weeks later, Susie herself was cooking for Nahm, but his search for live-in help remained futile because no servant was willing to stay overnight in the house.  Then Susie became ill, and she and Martha made a secret pact: after Susie’s recovery, she would return to work for Martha, not for Nahm.

The conspiracy continued through the fall of 1946, with Martha confiding to her children that “Max still says she is coming to work for him.”  When Susie finally rejoined Martha’s household in spring 1947, Nahm “got mighty mad,” but Martha haughtily denied having “stolen” his cook.  Although he found a replacement, the 84-year-old banker nursed a grudge that Martha attributed solely to ego.  “Max is still pouting with me about Susie,” Martha wrote in June 1948–a full three years after Sadie Brown’s tragic death in his kitchen.

Martha Potter’s letters about the politics of domestic service are part of the Lissauer Collection in the Manuscripts & Folklife Archives section of WKU’s Department of Library Special Collections.  Click here to access a finding aid.  For more collections of Bowling Green family papers, search TopSCHOLAR and KenCat.

Comments Off on Sadie and Susie 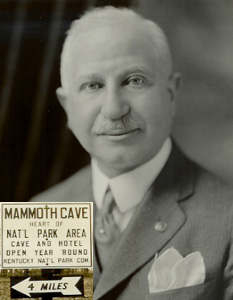